Sara Ali Khan to Romance Akshay Kumar and Dhanush in Atrangi Re? Is She Playing a Double Role? 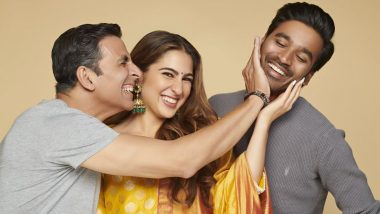 Aanand L Rai’s upcoming film, Atrangi Re, features Akshay Kumar, Sara Ali Khan and Dhanush in the lead roles. After what happened with Zero (Rai’s last project), the movie buffs are hoping Atrangi Re to be a really good one and it doesn’t tank at the box office. Fans are already excited seeing star cast and now, they are more eager to know what would be their roles. It was earlier reported that Akshay would be playing a cameo in this film, but the director clarified saying, “It’s not a cameo, but a very special character that is important to the narrative.” Now the latest developments suggests, Sara Ali Khan might be seen playing a double role in Atrangi Re. Isn’t that getting interesting now? Aanand L Rai Reveals About Akshay Kumar’s Role In Atrangi Re!

As per a report in Mirror, Sara Ali Khan would be seen romancing the lead heroes – Akshay Kumar and Dhanush.  Talking about it a source revealed to the tabloid, “While Atrangi Re is primarily a love story set in the heartland, laced with humour, the storytelling is in a zone the filmmaker has not attempted before. The screenplay follows a non-linear narrative of two romances from different timelines running in the parallel.” The source was further quoted as saying, “It’s a double role of sorts for Sara, the idea is to showcase diverse sides of the actress. Akshay and Dhanush’s characters too have a special trait that separates them from rest of the cast. Their appearances will be in sync with the way they act and react while a special look is being designed for Akshay.” Confirmed! Atrangi Re to Star Sara Ali Khan with Dhanush and Akshay Kumar - Check Out First Look.

(The above story first appeared on LatestLY on Feb 20, 2020 09:55 AM IST. For more news and updates on politics, world, sports, entertainment and lifestyle, log on to our website latestly.com).