Serious Men is directed by Sudhir Mishra and is streaming on Netflix. It is based on a best-selling novel by the same name, written by Manu Joseph. Nawazuddin Siddiqui plays the leading man, while the film also stars Aakshath Das, Indira Tiwari, Nasser, Shweta Basu Prasad, and Sanjay Narvekar. 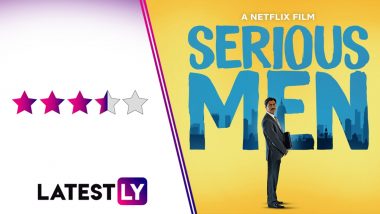 Serious Men Movie Review: It is interesting that the promotions to Sudhir Mishra's Serious Men played along with its leading man Nawazuddin Siddiqui's early struggling days. It is a theme that plays well with his character in the film, Ayyan Mani, who tries to uplift himself from the caste and societal-bonded barriers. Based on a best-selling novel by the same name by Manu Joseph, Serious Men is wickedly fun, often contemplative and makes the best use of Nawazuddin Siddiqui's deadpan humour. Serious Men to Premiere on Netflix on October 2! Here’s All You Need to Know about Nawazuddin Siddiqui’s New Film.

Ayyan Mani, a Tamil Dalit by birth, works as a PA to a scientist Dr Acharya (Nasser), and lives with his wife Oja (Indira Tiwari) in a rented chawl. Ayyan has the gift of gab and is very intelligent and street-smart, but feels he has been put down by condescending 'intellectuals' like Dr Acharya, who he labels as 'Serious Men'.

It is Dr Acharya, who is working on proving the existence of alien microbes, who inadvertently inspires Ayyan for his supposed ticket out of poverty. He uses his own son Aditya (Aakshath Das), who is being hailed as a child prodigy, to get him more respect in his chawl, at Aditya's school and even finds himself being asked for favours by a politician (Sanjay Narvekar) and his daughter Anuja (Shweta Basu Prasad). But as Ayyan himself points out in a moment in the film, while he may not favour Chaos Theory, but his actions would bring some repercussions in his life, even if he nearly managed to fool the whole world around him.

Watch the Trailer of Serious Men:

Though I haven't read the book, the movie reminded me of the infamous Prathap NM aka the 'Drone Boy'. Hailed at first by the media for making India shine at international Robot Exhibition (iRex) in Tokyo, Japan with his drones, it was later found out that his claims couldn't be substantiated. Apparently, he only took pictures of himself standing next to exhibitions that he had no hand in creating.

The false popularity of 'Drone Boy' was less Prathap's fault, though he is culpable, but of the media in not substantiating his claims before they heralded him. Through Serious Men, Sudhir Mishra takes some witty digs at this ignorant stance of both media and consumers without making it very obvious and farcical.

Is Serious Men a satire? Sure, it has satirical elements from the aforementioned attitude of news channels to jump the gun, to subtly questioning the need to ask why crores of money are being spent to probe something as space microbes, when nearly more than 80% of our citizens live in abject poverty.

It is also about a lower-caste man's struggles to bring himself out of the poverty he thinks his Shudra identity has put him in there, while his upper-caste seniors like Dr Acharya and his competitive colleague Dr Namboodiripad are doing frivolous work at the top.

It is also a heist film, as Ayyan pulls a fast one on the world with his son. Seeing the rest of the characters through his con, we don't know who to believe whom and how. Are the politician and his daughter, Anuja, speaking the truth when they say their redevelopment project will help the poor? Dr Acharya's 'work' mostly turn out to be claims that massage his ego, but it is mostly because we see the character through Ayyan's eyes. Or for the matter, how much should we believe Ayyan's sad backstories? Raat Akeli Hai Movie Review: Nawazuddin Siddiqui and Radhika Apte’s Netflix Film Keeps You Guessing Till the End.

We don't know how Ayyan began his scheme - for we are dropped right in the middle of it - or how he managed to bring his hearing-impaired son into confidence, and how he kept his wife in the dark for so long about it. Oja feels almost a non-entity in the film - we don't exactly know her feelings, for it is always Ayyan who keeps his commentary on.

We know she goes for a job, but what her occupation is, we have no clue. It is only when the truth comes out, that we get to know a bit more about her and we realise that she comes from a harsher background than Ayyan's, whose snarky humour can barely hide his feeling of being victimised. After all, he begins his story with the tale of how his grandfather died from a heart attack after he got on to a train compartment reserved for Brahmins. It is also perhaps for the first time he had also heard her story, thus revealing his self-centeredness once again. For a man who claims to fight for his equal rights, he is exposed when it comes to gender disparity.

Like with Spike Lee's Da 5 Bloods that poked holes into white revisionist history of America, Sudhir Mishra manages to do so with Brahminical inclination of our society. Rarely do we have a character proudly flaunt his Shudra status, and leave others in embarrassment for slyly trying to gauge his background. Mishra also takes digs at certain Catholic schools' practice of conversions of lower-caste Hindus.

Serious Men is also a wonderful commentary on the city of Mumbai - or as Kangana wants to call it, 'POK'. The dreamy eyes of the city being juxtaposed against the meagre surroundings where the protagonist lives is a nice touch, and reminds you, that despite the many high rises that come up in Mumbai, things haven't changed much for the common man.

And when the film does all the above, Serious Men is absolutely scathing, witty and brimming with black humour (kudos to the writing team - Bhavesh Mandalia, Niren Bhatt, Abhijeet Khuman, Nikhil Nair). It is also aided by a terrific performance by Nawazuddin Siddiqui, whose ability to deliver dry wit is put to excellent use here. His Ayyan Mani isn't an unreliable narrator, and the movie doesn't try to change that. And yet thanks to Siddiqui's fine performance and Mishra restraining himself from making him a tragic figure, we get an interesting anti-hero here.

However, Serious Men draws its heart from the father-son story, an unconventional one at that. The father seeks a chance to come out of his poverty through his school-going son, the son plays along what his father wants without questioning till the pressure gets to him. The young Aakshath Das gives a lovely performance here, especially in the scenes he has to put up a manufactured attitude or where he is tormented by the demons of the narrative Ayyan has built up for him. The film slackens in pacing when the proceedings become serious and predictable. But it builds up to a decent enough culmination, of showing a world so comfortably perched in lies that it fails to recognise the truth even when it stands starkly in front of it.

Also a special mention to the film's amazing supporting cast. Indira Tiwari is truly fantastic in the scene where her character chides her husband for being self-centred. Shweta Basu Prasad is also wonderful as the scrupulous budding politician - I really wished I could know more about her, her convictions and her battles against the scars her abusive husband gave her. Nasser and Sanjay Narvekar lend able support to the film.

PS: As a Mallu, I have to ask this one question to the director - Did you really pass off Manori in Mumbai as a hamlet in Kerala in a crucial scene?

- Witty Narrative with a Satirical Attitude

- Loses Some of its Wit and Pace in the Second Half

Serious Men is, indubitably, one of Sudhir Mishra's more polished and better efforts, what with its smart satire and engaging storyline, with Siddiqui in fine form here! Serious Men is streaming on Netflix from October 2.

(The above story first appeared on LatestLY on Sep 29, 2020 01:21 PM IST. For more news and updates on politics, world, sports, entertainment and lifestyle, log on to our website latestly.com).