Serious Men to Premiere on Netflix on October 2! Here’s All You Need to Know about Nawazuddin Siddiqui’s New Show

Serious Men is one of the most-anticipated show starring Nawazuddin Siddiqui in the lead. Ever since the makers have announced about this Netflix Original, fans of this versatile actor are eagerly waiting for the show to be released. 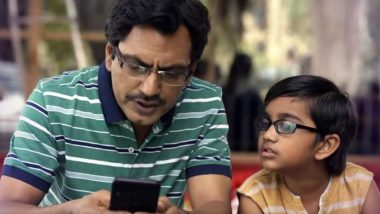 Serious Men is one of the most-anticipated show starring Nawazuddin Siddiqui in the lead. Ever since the makers have announced about this Netflix Original, fans of this versatile actor are eagerly waiting for the show to be released. After delivering impressive performances in Sacred Games and Raat Akeli Hai, one just cannot wait to see Nawazuddin Siddiqui in a new avatar. Whenever the actor has signed up any role, he has gotten into the skin of the character and has left the viewers amazed every single time. Serious Men Trailer: A Razor-Sharp Nawazuddin Siddiqui Takes A Common Man’s Journey Through The Path of Science in Sudhir Mishra’s Netflix Film (Watch Video).

Serious Men is all set to be released on October 2, which also happens to be a public holiday. It is indeed going to be one of the best treats during that weekend. Before Serious Men premieres, let’s take a look at the cast, plot and other key details of this Netflix Original. Serious Men Teaser: Nawazuddin Siddiqui Is a Man With Big Dreams For His Son In This Netflix Project (Watch Video).

Director: The ace filmmaker Sudhir Mishra who has helmed films such as Yeh Woh Manzil To Nahin, Hazaaron Khwaishein Aisi, Dharavi and Chameli, among others, has directed Serious Men.

Cast: Serious Men has a fantastic cats and we have already managed to catch a glimpse of their performance in the trailer that released today. This upcoming show features Nawazuddin Siddiqui, Indira Tiwari, Nasser, Aakshath Das and Shweta Basu Prasad.

Watch The Trailer Of Serious Men Below:

Plot: Serious Men is based on the book of the same name by Manu Joseph. It revolves around the life of a middle-class father who is tormented with his under-privileged status. This ambitious underachiever father tries to use his son’s newfound fame to improve his family’s fortunes.

When & Where To Watch: Produced by Bombay Fables and Cineraas, Serious Men is all set to be released on October 2, 2020 on the streaming giant Netflix.

So these are some of the highlights of Nawazuddin Siddiqui starrer Serious Men that is all set to be premiered on this Gandhi Jayanti!

(The above story first appeared on LatestLY on Sep 18, 2020 01:59 PM IST. For more news and updates on politics, world, sports, entertainment and lifestyle, log on to our website latestly.com).