Serious Men Teaser: Nawazuddin Siddiqui Is a Man With Big Dreams For His Son In This Netflix Project (Watch Video) 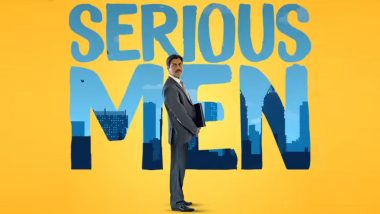 Manu Joseph's book Serious Men is all set to be adapted for Netflix and a teaser of the same is now here. The film will star Nawazuddin Siddiqui in its lead role. The Sudhir Mishra directorial will premiere on the streaming giant on October 2 and well the new 30-second teaser will surely leave you excited for it. Serious Men features Nawazuddin Siddiqui along with Aakshath Das, Shweta Basu Prasad and Nassar, and Indira Tiwari. While the teaser doesn't give away much, we see Nawazuddin along with his voiceover as he talks about his son. We can't wait to see Nawaz take on this interesting role. Nawazuddin Siddiqui's Wife Aliya Records Statement Against the Actor and His Family With UP Police.

The film's story revolves around an ambitious underachiever who learns that his son is a genius and strives to make their situation better with his son's talent. Every time Nawaz comes on board for a Netflix project, there's no doubt that he brings something that will entertain, be it his Sacred Games stint or the recent film Raat Akeli Hai, which fetched him some glowing reviews. Sharing the new teaser, Netflix wrote, "First gangster, then cop, and now, a loving father. Nawaz is #SeriousMen." The teaser has Nawaz's voiceover, where he speaks about men who ask the weirdest questions sitting in big buildings. He speaks about making his son Aadil too a 'serious man'. Jogira Sara Ra Ra: Nawazuddin Siddiqui and Neha Sharma's Romantic Comedy to Go On Floors in February 2021.

The film happens to be Nawazuddin's first collaboration with director Sudhir Mishra and speaking about the same, Naaz said, "I am excited about this film as I waited almost 20 years to work with Sudhir Mishra. It’s a dream come true. I can’t wait for the audience to watch Serious Men and join this journey with me, this Gandhi Jayanti.”

(The above story first appeared on LatestLY on Sep 16, 2020 12:44 PM IST. For more news and updates on politics, world, sports, entertainment and lifestyle, log on to our website latestly.com).