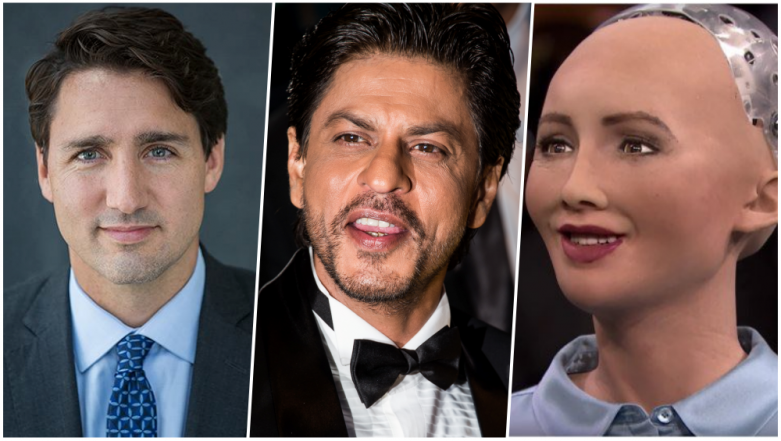 How does an Indian actor become a global icon? Be part of Western showbiz aka act in Hollywood movies. However, there is one superstar who does not need a ticket to Hollywood to rule worldwide. He is none other than Shah Rukh Khan. The 52-year-old is King Khan, King of Romance or Badshah of Bollywood for not just us desi fans but all across the globe. The man has the power to bring a city to a standstill with his charismatic persona.

One would find fans flocking outside his palatial residence Mannat in Mumbai, the city of Hindi cinema aka Bollywood. And, then there’s no difference seeing the enthusiasm among fans in countries such as Russia, Germany, France and Belgium. Forget Hindi, these are non-English speaking nations! Not just aam janta, Shah Rukh Khan boasts of fans and admirers in international celebrities. From Canadian Prime Minister Justin Trudeau to WWE star John Cena, Brazilian author Paulo Coelho to humanoid robot Sophia, everyone is self-confessed fans of King Khan!

If you think John Cena’s immense love and respect for Shah Rukh Khan is over, then you got to see WWE star’s recent Instagram post for King Khan. Cena shared a picture of SRK with a quote on it reading, "It's not necessary that the world will accept your creativity but don't give up on it." This is not the first time Cena has shown his admiration for Bollywood superstar.

In addition to a number of Insta posts, the fans got to see two insanely famous global stars having a hilarious Twitter chat. Yes, it involved John Cena’s popular catchphrase -- "You Can't See Me". Keep all the love coming, John!

Pakistani-origin English singer-songwriter Zayn Malik first met Shah Rukh Khan in 2015 during an Asian Awards in London. Their very first selfie went on to set the most retweeted record on Twitter. Their camaraderie did not stop at that as the former ‘One Direction’ member who has recorded his first Bollywood song in 2018 confessed to be a huge SRK fan despite finding the superstar actor ‘a tad arrogant’ in his movies. Zayn in his interview with Elle India was quoted saying, "I personally wasn't a huge fan until I met him. I realised how humble he is. Really showed a different side to him. He always came across as slightly arrogant in the movies to me but when I met him in real life, he was so nice. He just completely changed my opinion of him."

Shah Rukh’s 'Devdas' and 'Kabhi Khushi Kabhi Ghum' are his favourite movies. Zayn also revealed his most loved songs is again King Khan starrers, Dil Se and Chaiyya Chaiyya. In fact, the young music sensation is such a die-hard fan of King Khan that he made his supermodel girlfriend, Gigi Hadid watch Devdas!

No one can escape the charm of the King of Romance – not even world’s first robot citizen! Sophia, Hong Kong-based Hansen Robotics created humanoid confessed of Shah Rukh Khan to be her favourite Hindi film actor during an interactive session at recently held World Congress on Information Technology (WCIT) in Hyderabad. The King of Romance acknowledged Sophia’s confession in his trademark witty manner.

Public declaration of love for a ‘lady’ who has come to my country, India. U Simulate me, every bit and byte of u, Sophia. https://t.co/HxAhTORpHD

The Jab Harry Met Sejal actor tweeted, "Public declaration of love for a ‘lady’ who has come to my country, India. U Simulate me, every bit and byte of u, Sophia."

Popular world leader and Canadian Prime Minister Justin Trudeau is on a week-long India visit along with his family. The 46-year-old was greeted by the filmy fraternity and but naturally Shah Rukh Khan being the flag-bearer of Bollywood. Trudeau took to Twitter writing about his meeting with King Khan.

Tonight, we celebrated stronger ties & new co-production opportunities between Bollywood and the Canadian Film Industry. And who better to help than @iamsrk himself... Great to meet you! 🇮🇳🇨🇦 pic.twitter.com/1OcwsA9lMS

He tweeted, “Tonight, we celebrated stronger ties & new co-production opportunities between Bollywood and the Canadian Film Industry. And who better to help than @iamsrk himself... Great to meet you!”

These are some of the recent cases of international celebs showcasing their love for Shah Rukh Khan. Former United States President Barack Obama quoting dialogue from his iconic movie Dilwale Dulhania Le Jayenge to award-winning writer Paulo Coelho’s continuous show of love and support to many, many other actors, actresses, world leaders, global CEOs fall in the long list of SRK admirers.