When Shah Rukh Khan, Leonardo DiCaprio and Martin Scorsese Were Rumoured to Do a Hollywood Movie Together and This Pic Started The Gossip! 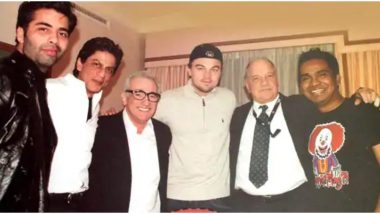 Bollywood superstar Shah Rukh Khan has never shown any particular inclinations to starring in a Hollywood movie, though he is one of the most followed, richest stars in the planet. King Khan had revealed quite a few times that the offers used to come up, but he never found them fetching enough. Don't know how true it is, but there was a story but during his younger days, SRK was offered a role in a James Bond movie. The Grey Part of Blue: Shah Rukh Khan's Daughter Suhana Steals Our Heart with Her Performance In This Short Film (Watch Video).

That may have never happened, but Shah Rukh Khan was reportedly close to being a part of a big Hollywood project earlier this decade. The film called Xtreme City would have had the involvement of Leonardo DiCaprio and Martin Scorsese! I am not kidding!

Xtreme City made to the news in 2011, after Shah Rukh Khan had met Martin Scorsese at the Berlin Film Festival. Shah Rukh Khan was reportedly shooting for Don 2 then. The meeting also involved Leonardo DiCaprio, producer David Weisman, writer/director Paul Schrader and writer and SRK's close friend Mushtaq Sheikh. Even Karan Johar was part of the meeting. The project they had discussed then was Xtreme City, a Hollywood gangster film, as went the grapevine.

Scorsese was to produce the film along with Weisman, while Schrader, who had made films like American Gigolo and Dominion: Prequel to the Exorcist, was to direct the film. SRK was to essay the role of a gangster, while Leo was rumoured to essay a cop assigned to catch him. Martin Scorsese Birthday Special: 7 Lesser-Talked About but Brilliant Films by The Irishman Director That You Need to Watch Right Away!

In an interview to PTI, Sheikh, who had scripted the film along with Schrader, had revealed details of the plot. He had said, "It's a different kind of film, one where both Indian and American protagonists are balanced human beings and the story treats them in their full complexity without either culture being diminished or taken for granted. It's a cross-cultural thriller designed for both Bollywood and Hollywood. And if we get it right, (then) this will be an attempt at true global entertainment." While Sheikh, who had scripted Om Shanti Om and Ra.One, confirmed Shah Rukh Khan's presence in the film, he refrained from saying if Leo would play the second lead.

When the media reports about SRK and Leo in the film became stronger, Leo's publicists issued a statement that this was not true. If that was the case, was the meeting in Berlin, merely a catchup or was the denial just to protect details? Some other reports say that Xtreme City was never discussed during the above meetup, instead, it was just those cultural phenomenons catching up at a common avenue. If so, we wonder why Sheikh had said that stuff in the PTI interview.

Whatever the case is, the news of Xtreme City died a slow, silent death, and it was only recently brought up again, when a couple of SRK fans shared a fanmade poster about the film on Scorsese's birthday. Have to say that, whether this film was ever planned or not, Xtreme City is now feeling to be a lost golden opportunity.

(The above story first appeared on LatestLY on Nov 18, 2019 07:20 PM IST. For more news and updates on politics, world, sports, entertainment and lifestyle, log on to our website latestly.com).