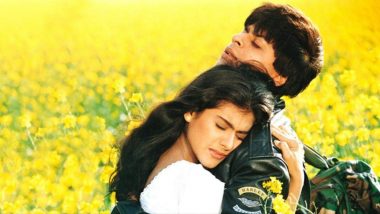 Shah Rukh Khan has a fan following that is massive and there's no doubt that he is a global star despite starring only in Hindi films. Shah Rukh Khan has got fans all over the world hooked to Bollywood and they never fail to show their love for him in unique ways. A video featuring an African couple lip-syncing to SRK's popular Dilwale Dulhania Le Jayenge is now doing the rounds on social media after Bollywood actor Anupam Kher shared it on his Twitter account. Shah Rukh Khan Gives a Witty Reply to His 'Jabra Fan' Raju Bhai Who is on a Mission to Meet Him!

Sharing the video, Kher wrote, "Presenting #Sharukh and #Kajol from Kenya lip-synching the eternal love song from the eternal #dilwaledulhanialejayenge. Video shared by the man who composed the song, @pandit_lali. Enjoy.#MusicIsUniverse." The film is special not only for Shah Rukh but also for Kher because he famously played SRK's father in the film. Kher's message along with the video suggested how music has the power to unite us all.

Check Out Anupam Kher's Shared a Video of SRK Fans:

Presenting #Sharukh and #Kajol from Kenya lip-synching the eternal love song from the eternal #dilwaledulhanialejayenge. Video shared by the man who composed the song, @pandit_lalit. Enjoy.🤓🙏😎😍 #MusicIsUniversal pic.twitter.com/5gwga3kARv

After Kher shared this video, fans were super excited about it and praised the couple from the video. A user following Kher posted another video featuring the same couple where they are seen dancing to Shah Rukh Khan's other popular song, "Sooraj Hua Maddham" from Kabhi Khushi Kabhi Gham. #WeWantAnnouncementSRK - Shah Rukh Khan Fans Stir Up a New Twitter Trend as They Wait For His Movie Announcement!.

Check Out Another Video of the African Couple:

Watch Another Video of him 👇 pic.twitter.com/rc65qZnpPg

It is amazing what lengths fans go upto to show their love for their stars. On the work front, Shah Rukh is yet to announce his upcoming project and fans are eagerly waiting for it.

(The above story first appeared on LatestLY on Sep 13, 2019 09:05 AM IST. For more news and updates on politics, world, sports, entertainment and lifestyle, log on to our website latestly.com).