Akshay Kumar and Katrina Kaif will be seen in Rohit Shetty's Sooryavanshi next and here's what we know about the film as of now. 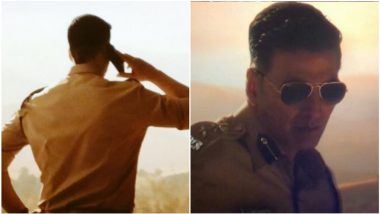 Akshay Kumar and Katrina Kaif are once again coming together for a film. The popular on-screen pair has been roped in for this action filled Rohit Shetty directorial, Sooryavanshi. By now all the fans who follow he flick's goss know that Akki will be playing an ATU officer. But did you know that this story will be from the 90s generation? According the latest reports in pinkvilla.com, the story is from the 90s era and will also have a sequel! Katrina Kaif Has Immense Confidence in Ex Flame Salman Khan, Says He Will NOT Clash Inshallah With Sooryavanshi.

A source told the entertainment portal, "Rohit is planning to present Akshay in a never-seen-before avatar. This won't be in any way similar to the Singham or Simmba franchise. In fact, it won't be based in modern times. The film is set in the 1990s where Akshay's character will be solving an important case. He is the chief of the Anti Terrorism Unit (ATU). The movie will trace how Akshay becomes Sooryavanshi and it will be followed up with another sequel, too."

Adding a few more bits of information on the plot, the source added, "The film will be tracked to a time where you don't have CCTV cameras and social media. So the treatment has to be very different and it will also trace how the police would investigate cases without these modern day equipment that aid in evidence proofs."

Well,  now you know what to expect from this mega movie. This will be for the first time that Shetty will try out a 90s backdrop. While most of his films were light-hearted and set in the modern era, this one looks intense than all. What do you think about this new revelation?

(The above story first appeared on LatestLY on Apr 29, 2019 08:02 PM IST. For more news and updates on politics, world, sports, entertainment and lifestyle, log on to our website latestly.com).