Street Dancer 3D's Garmi Song Teaser: Varun Dhawan and Nora Fatehi are All Set to Bring a Sensational Party Track and We Can't Wait to Watch It Soon!

The song "Garmi" is all set to be out soon and will feature Varun along with Nora Fatehi. A teaser of the song has now released and it looks like it is going to be a massive party track. 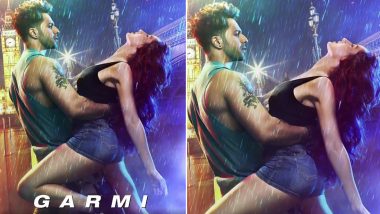 After we saw the smashing trailer of Varun Dhawan and Shraddha Kapoor starrer Street Dancer 3D, a teaser of the first song from the film is here and it looks like it is going to be one big chartbuster, just in time for the New Year's Eve parties. The song "Garmi" is all set to be out soon and will feature Varun along with Nora Fatehi. Sharing a teaser of the film, Varun wrote, "#GARMI it’s not a love song it’s a club song @Its_Badshah coming soon #varunxnora". The song teaser shows Varun and Nora in a steamy embrace with London's Big Ben in the background. Street Dancer 3D: Varun Dhawan and Shraddha Kapoor Are Up for a Dance Off in the New Poster of the Film (View Post).

The song has been sung by Badshah and from the teaser, it certainly seems like it is going to be a massive hit. We can't wait to see the song video which will feature Varun and Nora pulling off some mean moves. Both Varun Dhawan and Nora Fatehi are great dancers and we can't imagine the magic they'll spill in this song.

Check out the Song Teaser Here:

Street Dancer 3D is not a sequel to ABCD 2 but is a separate dance film altogether. From the trailer of the film, it certainly looked like it is going to be a dance film with a message. The film also stars Prabhudheva in a key role.  Street Dancer 3D: Trailer of Varun Dhawan-Shraddha Kapoor Starrer to Release on December 18, Video.

Helmed by Remo D'Souza, Street Dancer 3D is slated to hit the theatres on January 24, 2020. The film is expected to clash with Kangana Ranaut's Panga at the box office.

(The above story first appeared on LatestLY on Dec 24, 2019 10:30 PM IST. For more news and updates on politics, world, sports, entertainment and lifestyle, log on to our website latestly.com).