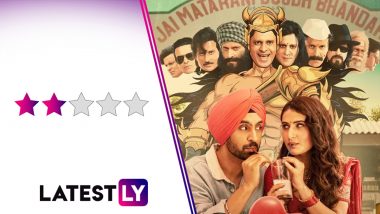 Suraj Pe Mangal Bhari Movie Review: Abhishek Sharma's Suraj Pe Mangal Bhari is the first new mainstream Hindi film to properly release in theatres, ever since the lockdown has been announced in March. With theatres slowly opening everywhere in the country, except in a few states, the big question on your mind would be - should we risk going for a film like Suraj Pe Mangal Bhari when COVID-19 hasn't gone into oblivion? I wish I could have a different answer, but unfortunately, this comedy isn't worth that risk. Even with a stellar cast involving the likes of Manoj Bajpayee, Diljit Dosanjh, Fatima Sana Shaikh, Annu Kapoor Manoj Pahwa, Seema Pahwa, Supriya Pilgaonkar and Vijay Raaz. Suraj Pe Mangal Bhari: Diljit Dosanjh, Manoj Bajpayee and Fatima Sana Shaikh's Next to Have a Theatrical Release During Diwali.

Suraj Pe Mangal Bhari is set in the mid '90s, when Bombay was turning into Mumbai. Why '90s, I am not very sure. Maybe, the idea was to show how Manoj Bajpayee's PI could have sustained better in a world that wasn't controlled by social media. Otherwise, the entire premise would have fallen flat. Which it happens, anyway.

So Manoj Bajpayee plays Madhu Mangal Rane, a Maharashtrian private investigator, who styles himself after Karamchand. He uses disguises to investigate potential grooms on behalf of the brides' families and find out if they have any vices. One of his targets is Suraj (Diljit Dosanjh), the jovial son of a Punjabi stable owner (Manoj Pahwa).

Suraj's marriage alliance gets broken as a result of Madhu's findings, so he and his friend (Manuj Sharma) seek out who the private investigator is. In the process, Suraj falls for Madhu's sister Tulsi (Fatima Sana Shaikh), which deepens Madhu's anger towards him.

Suraj Pe Mangal Bhari banks itself on the comic timing of its two main leads, Manoj Bajpayee and Diljit Dosanjh, along with the rest of the cast. While Diljit is his usual exuberant self, Bajpayee tries too hard to tickle our funny bone. The actor still manages to own the show, but looks very tired in certain sequences. Also, he looks a bit too old to play Supriya Salgaonkar's son.

But casting and performances are the least of the problems for Suraj Pe Mangal Bhari. In fact, the performance are the only reason this movie is worth watching, with each actor giving all they can. Save for Vijay Raaz, who is sadly wasted in a very inconsequential cameo.

Suraj Pe Mangal Bhari's Achilles Heel is that despite the actors' best efforts, it isn't funny enough. Some of the dialogues do manage to elicit a few chuckles and some gags work. But the rest of the film end up being a humourless farce. Fatima Sana Shaikh Talks About Suraj Pe Mangal Bhari And Being Replaced in Bhoot Police.

Maybe because the film is set in the '90s (though there are plenty of discrepancies from present times that are seen in the BG), even the writing occasionally reflects the (problematic) attitude of Hindi cinema then. In a scene, Suraj, in trying to woo Tulsi while in a makeup shop, asks her to buy lipsticks for his mother (?). She asks how fair his mother is, so that she can choose the right colour (?). He says that his mother isn't dark but isn't fair either, before hastily saying that he looks more like his father. In case you wonder if they could have placed a 'Fair and Lovely' ad also in there, the whole scene begins with Suraj thinking why the girl needs to buy fairness products when she is so fair! Subtle!

While the first half of the film is at least bearable, the second half goes for a toss when Madhu goes to some bizarre lengths to break up Suraj and Tulsi's romance. And then, all of a sudden, he has a change of heart in the climax, when she is about to marry someone else. By then, I had already stopped trying to reason with anything that's happening on screen.

If you think Madhu was problematic, meet his sister. Tulsi is rebellious enough to have a secret job as a DJ, but keeps up with her brother's misogynistic whims. She never seems to have any sort of resolve of her own, and wants the men around her to take decisions for her. The writing clearly to be blamed here.

By the time we reach a DDLJ-spoofing climax, the only thought in my brain is, is there a PPE kit to screen ourselves from farce?

- The Comic Timing of the Staff

Suraj Pe Mangal Bhari finds its suraj in its terrific cast that suffers from a mangal in its inane, unfunny script and average direction. All on you, if you want to risk your health to head to theatres to watch this one. Avoidable!

(The above story first appeared on LatestLY on Nov 12, 2020 11:02 PM IST. For more news and updates on politics, world, sports, entertainment and lifestyle, log on to our website latestly.com).