Aditya Chopra reached the Police station to record his statement in the Sushant Singh Rajput's death probe. The actor had a contract with Yash Raj Films. 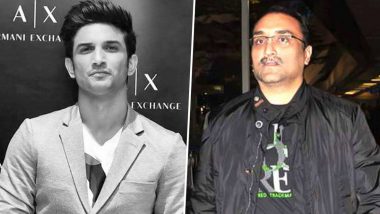 Mumbai Police has been consistently recording statements of people who have been connected with Sushant Singh Rajput ever since his death on June 14. As of now, more than 34 people have been questioned and today, it was Aditya Chopra's turn. As per ANI, the filmmaker arrived at the Police station to record his statement. There are reports that he was there with two of his lawyers. YRF had submitted Sushant's contract with the company earlier. The actor had worked in two of their movies, Shuddh Desi Romance and Detective Byomkesh Bakshy. Sushant Singh Rajput Death Probe: Bandra Police Questions YRF’s Casting Director Shanoo Sharma

Since Sushant's fateful death, people have been coming out with many conspiracy theories. Twitterati has blamed everyone from Karan Johar to Aditya Chopra for driving the actor to take such an extreme step.

Many were demanding a CBI inquiry on Sushants death alleging that something is fishy. But Maharashtra Home Minister Anil Deshmukh ruled out the possibility, putting faith in Mumbai Police's investigation. The cops have been speaking to everyone who was even remotely linked to the actor. They have already questioned Rhea Chakroborty, his girlfriend, his psychiatrist, his friend Mahesh Shetty and many more.

(The above story first appeared on LatestLY on Jul 18, 2020 03:24 PM IST. For more news and updates on politics, world, sports, entertainment and lifestyle, log on to our website latestly.com).