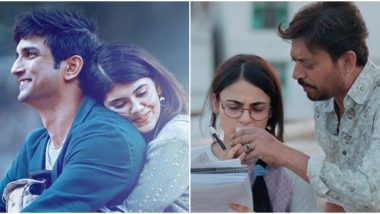 Sushant Singh Rajput's Dil Bechara movie's trailer released and the fans are heavy with emotions. The actor died by suicide on June 14, 2020, leaving everyone shattered. His last on-screen presence will be in Dil Bechara. The fans are extra emotional to watch this movie on Disney+ Hotstar on July 24, 2020. However, in the recent times, more such posthumous Bollywood releases were seen in the industry. Here is going down the lane of nostalgia of such releases that made fans miss the late actors starring in them a bit more. Dil Bechara Trailer: 'Ye Kahaani Adhoori Hai' Say Netizens as They Miss and Fondly Remember Sushant Singh Rajput (View Tweets).

Irrfan Khan In Angrezi Medium- The talented actor passed away on 29 April 2020 due to colon infection.  His last film was released on 13 March 2020 that co-starred Radhika Madan and was directed by Homi Adajania. But its theatrical run was cut short due to COVID-19 pandemic. It was later released on Disney+ Hotstar, after the actor's demise.

Sushant Singh Rajput In Dil Bechara- The brilliant star died by suicide on June 14, 2020. His last film, also starring Sanjana Sanghi in the lead, is releasing on 24 July, 2020 on Disney+ Hotstar. The movie is directed by Mukesh Chhabra and also stars Saif Ali Khan.

Sridevi In Zero- The legendary actress was last seen in Shah Rukh Khan, Katrina Kaif, Anushka Sharma starrer in a cameo appearance. She passed away due to accidental drowning in Dubai on 24 February, 2018. The Aanand L Rai directed movie was released later that year on 21 December 2018.

Om Puri In Viceroy's House and Tubelight- The versatile star died of heart attack on 6 January 2017. His last on-screen appearance was seen in Gurinder Chadha's British-Indian historical drama, 'Viceroy's House.' It was released in India on 18 August 2017 as Partition: 1947 and worldwide on 1 September 2017 as Viceroy's House. He was also seen in Salman Khan's Tubelight that released on 23 June 2017.

Amrish Puri In Kisna: The Warrior Poet- The 'Mogambo' of Bollywood passed away due to cancer on 12 January 2005. His last presence was in this Subhash Ghai directed film that was released on 21 January 2005.

Earlier, fans also saw posthumous releases of Bollywood personalities like Smita Patil, Divya Bharti, Sanjeev Kumar, Yash Chopra, Farooq Sheikh, Amjad Khan to name a few. Even though these talented artists of B-town are no more with us, they live in our hearts through their films.

(The above story first appeared on LatestLY on Jul 06, 2020 07:24 PM IST. For more news and updates on politics, world, sports, entertainment and lifestyle, log on to our website latestly.com).