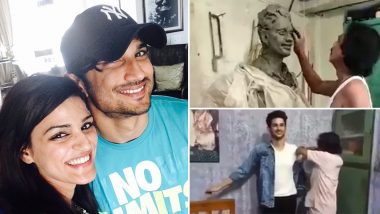 Shweta Singh Kirti, a sister of late actor Sushant Singh Rajput, was touched to see a sculptor carving a statue of her late brother in wax. Shweta took to the social media to express her gratitude, saying she felt "as if bhai came alive". While many fans have been signing online petitions for putting a wax statue in Madame Tussauds, Asansol-based veteran sculptor Susanta Ray is attracting headlines after crafting a wax statue of Sushant. Sushant Singh Rajput’s Wax Statue Sculptor Sukanto Roy Reveals How He Made It Using Late Actor’s Photographs

Shweta also saw his work and was touched. She shared his work with a heartwarming caption on the social media. "Felt as if Bhai came Alive! Thank You," she wrote while sharing a video. In another tweet, she shared a painting made by another artist and wrote: "This is brilliant." Sushant Singh Rajput’s Wax Statue Made by Asansol-Based Artist Sukanto Roy Is a Lovely Tribute to the Late Actor (View Pics)

Sushant was found dead at his Mumbai home on June 14. Sushant's girlfriend Rhea Chakraborty and her brother Showik were arrested in a drugs case related to the death. The death case and related matter are under investigation by the CBI, Narcotics Control Bureau, and the Enforcement Directorate.

(The above story first appeared on LatestLY on Sep 20, 2020 07:03 PM IST. For more news and updates on politics, world, sports, entertainment and lifestyle, log on to our website latestly.com).