This week, we will see the release of Thackeray, the biopic made on one of the most controversial politicians who ever lived in India, the late Balasaheb Thackeray. 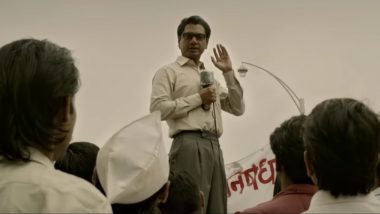 January 2019 is a month of controversial releases. Two weeks back, we had seen the releases of two allegedly politically motivated movies, Uri - The Surgical Strike and The Accidental Prime Minister. This week, we will see the release of Thackeray, the biopic made on one of the most controversial politicians who ever lived in India, the late Balasaheb Thackeray. Nawazuddin Siddiqui is playing the lead in the film, with Amrita Rao marking a return to the big screen with this biopic. Kangana Ranaut Remembers Balasaheb Thackeray On His Birth Anniversary Despite Manikarnika: The Queen of Jhansi-Thackeray Clash! (Watch Video).

Thackeray is directed by Abhijit Panse and is being released simultaneously in both Hindi and Marathi. Shiv Sena MP Sanjay Raut is producing the movie, while also have written it. Releasing on January 25, Thackeray will be clashing with Kangana Ranaut's Manikarnika: The Queen of Jhansi. Manikarnika The Queen of Jhansi Movie: Review, Box Office Collection, Budget, Story, Trailer, Music of Kangana Ranaut, Ankita Lokhande Film.

Here's everything important you need to know about Thackeray the movie, from its cast to its budget.

Nawazuddin Siddiqui's casting as Bal Thackeray has raised several eyebrows. While he is a right fit when it comes to matching the revered leader physically, the fact that Nawaz is both from Uttar Pradesh and a Muslim - two things Thackeray's party was against - makes his casting so unusual. Amrita Rao plays his wife, the late Meenatai. The movie also has actors portraying real-life personalities like Indira Gandhi, Uddhav and Raj Thackeray, Jambuwantrao Dhote, Haji Mastan etc.

Thackeray the movie shows the rise of Bal Thackeray as a politician in Maharastra in the '70s, founding the Shiv Sena party in the process. The film shows his agitations against South Indians, Muslims, and working for making the rights of Maharashtrians the first priority in the state. It would also show his alleged involvement in the 1993 Bombay Riots and the legal battle that follows.

ICYMI, here's the trailer of Thackeray -

The budget of Thackeray is not yet available, though trade experts peg it to around Rs 25-30 crore.

Rohan-Rohan and Sandeep Shirodkar have scored the music for the film, with lyrics written by Dr Sunil Jogi, Manoj Yadav and Manndar Cholkar. Here's the jukebox of the film -

While Manikarnika is expected to dominate the box office, Thackeray would do well in the Mumbai circuit, considering how popular the late political kingpin was among the masses here. Trade analyst Girish Johar told Indian Express, “Thackeray will be a strong phenomenon in Maharashtra. Nawazuddin Siddiqui is a brilliant actor and the film is being pegged on his shoulders. He looks like a doppelganger of late Shiv Sena leader in the movie and going by the buzz around it, the film will earn around Rs 3-4 crore on day one.”

Watch this space for the complete review of the film.

So will Thackeray manages to beat Manikarnika at the box office? Or will it perform decently under the shadow of Kangana Ranaut's film? We will find out once the opening weekend is over!

(The above story first appeared on LatestLY on Jan 24, 2019 11:41 AM IST. For more news and updates on politics, world, sports, entertainment and lifestyle, log on to our website latestly.com).