As per latest reports, the makers of Thank God, starring Ajay Devgn, Rakul Preet Singh and Sidharth Malhotra in the lead, are planning to begin the shooting of the comedy drama in September. 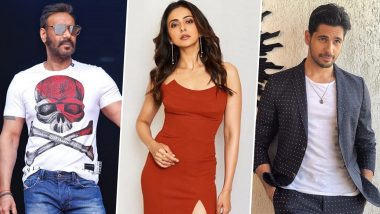 Shooting of several films, TV shows and web-series had to be suspended owing to the ongoing global crisis. In some cases, only the last leg of the schedule was pending to be shot when this outbreak happened and lockdown was imposed and a ban on travelling abroad was also issued. Hence, if makers have any plans to conduct shoot at international locales, it has to be reworked. Now as per latest reports, the makers of Thank God, starring Ajay Devgn, Rakul Preet Singh and Sidharth Malhotra in the lead, are planning to begin the shooting of the comedy drama in September. Ajay Devgn, Rakul Preet Singh and Sidharth Malhotra Starrer Comedy-Drama Is Titled ‘Thank God’.

Directed by Indra Kumar, a source revealed to Mid-Day that the makers are planning to kick-off the first schedule in Mumbai. Talking about the shooting schedule of this upcoming flick, a source was quoted as saying, “Come September, the first schedule will be conducted at a set in Mumbai, in adherence with the safety guidelines. A chunk of the movie has to be shot in the United Kingdom; the makers will chalk out the foreign leg once the international travel restrictions are lifted. The project was to originally go on floors on April 10, but was impacted by the lockdown.” However, there has been no official announcement made on it yet. Confirmed! Ajay Devgn to Produce a Film on Galwan Valley Clash.

The source also revealed about Ajay Devgn and Sidharth Malhotra’s characters in the film. About it, the source further mentioned, “Devgn will play a bitter and bankrupt middle-aged man, who gets a new lease of life after a car crash. Sidharth’s character changes his outlook on life.” Lead actress Rakul Preet Singh is working for the third time with Sidharth after Aiyaary and Marjaavaan, and second time with Ajay after De De Pyaar De. Produced under the banners of T-Series and Ajay Devgn FFilms, the makers reportedly have plans to release Thank God in May 2021.

(The above story first appeared on LatestLY on Jul 15, 2020 08:49 AM IST. For more news and updates on politics, world, sports, entertainment and lifestyle, log on to our website latestly.com).