Tillotama Shome on Her Award-Winning Movie Sir: ‘This Film Changed Something in Me’

Actor Tillotama Shome says she has largely played characters on the margins of the society but with her latest film "Sir", a tender love story set in the backdrop of class divide, she was confronted her biases. 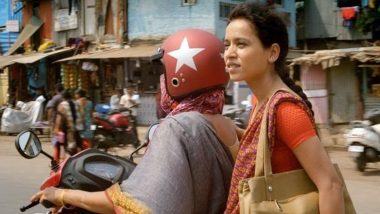 Actor Tillotama Shome says she has largely played characters on the margins of the society but with her latest film "Sir", a tender love story set in the backdrop of class divide, she was confronted her biases. The film, directed by Rohena Gera and also starring Vivek Gomber, premiered at Cannes in 2018, is an close look at the unbreachable class divide within Indian homes through the love story between a live-in maid and her employer. "I thought I was a good person (but) when I read the script, I realised I too have these prejudices. Sir Trailer: Vivek Gomber, Tillotama Shome’s ‘Forbidden’ Love Story Delicately Questions the Barriers Put up by Society (Watch Video)

Can I imagine falling in love with a man who works in my house? Why not? Why am I that person because I have grown up in a society where that is not even thinkable, I have not questioned it," Tillotama told PTI in an interview here. As an actor, she sometimes thinks whether cinema can bring about a positive change. "If you are in a good mood, you think films can change and if you are in a bad mood, you think it can't change, but this film changed something in me. Internally, I recognised that I am not as nice as I am. There is a long way to go," Tillotama said. Shoojit Sircar Recommends Detox for Cellphone and Social Media Addiction.

The actor, who has starred in some of the most acclaimed films in Hindi cinema such as "Monsoon Wedding", "Shanghai", "Qissa: The Tale of a Lonely Ghost" and "A Death In The Gunj", said people are more differential and respectful to celebrities and the rich, while ignoring those who work in their own kitchens. "Treating everyone equally is perhaps the lowest common denominator that we should all have. We talk about it but most of us don't have it. That just shows how we have just accepted this dirt that exist within us."

The actor, who lived in the US for five years, said the culture of house help is more prevalent in India but they remain invisible. "People in the US have to be super rich to have a house help, people usually do everything on their own. It is very unique to our culture that we have house help. We are such a class-driven society, we can't imagine to fall in love with those who take most care of us.

"We take it for granted. We are so spoilt and privileged. We don't understand what is going on in our country is like invisible slavery that there are people, who are working so much for so little." Tillotama said she has been careful in showing the humane side of people, who come from a marginalised society. "I have made a career out of playing characters that are marginalised, invisible and poorest of poor. I have always been very conscious of the fact that I don't want to caricaturise, romanticise, victimise or misrepresent them. That has been a very important thing for me," she said.

In playing Ratna in "Sir", Tillotama was careful in adhering to the character's inherent dignity and self-respect. "I had asked Rohena Gera (director) how should I prepare for this part? One of the things she told me was that no matter how indignifying Ratna's situation maybe, she never loses her sense of dignity. And dignity is not something that only the rich or poor have, dignity is something that you either have it or don't have it, you can't buy it.

"I held on it throughout the whole film as that for me was the 'sur' (tone) of the character. At no point, she loses her sense of optimism, pride or dignity."

"Sir" premiered at Cannes in 2018 and won the Gan Foundation award at the festival. It was also screened at Brussels and New York film festivals.

The film is scheduled to be released on March 20 in India by PVR Pictures and Shiladitya Bora's Platoon One Films.