Today is World Music Day. Sadly, Bollywood's relationship with a melody has been quite disturbing for a while now in the remix age. Hence, to celebrate this day, we thought of telling you about songs that are still gold, songs that are forgotten, songs that deserve more love than they got 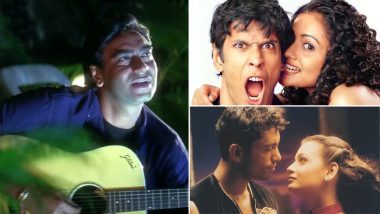 Today is World Music Day 2021. These days melody is quite upset with Bollywood, so you won't find them in many of the tracks that are released. So it's only obvious to go a few steps back into the past to cherish melodies that are everlasting and classic. But we decided to do something better. Radio and music channels have managed to bring to the generation of today the beautiful tracks of the yesteryears. Today you will find a teenager of today singing Lata Mangeshkar's eternal classic 'Lag ja gale'. However, we have decided to bring to you some amazing tracks which are so fascinating to hear. World Music Day or Fête de la Musique 2021: From Date, History and Significance, Here’s All You Need To Know About This Musical Event

A Milind Soman starrer, Rules: Pyar Ka Superhit Formula is lost. A highly underrated and underappreciated movie, it also had some crazy tracks which are still so nice to hear. 'Chodo Na Mujhe' in particular, had two versions sung by Kunal Ganjawala. The pain of being left behind by your love is so poetically done here that you will hear it on loop.

Back in the 90s, the Indian pop scene was vibrant and pulsating. There are several gems from the time but this one is our favourite. Sung by Babul Supriyo and Alka Yagnik, it has Dia Mirza in a drama setting. What a pure melody!

Takshak is one of the most underappreciated films on a social cause. An A R Rahman gem, this song is sung by Roopkumar Rathod in his silken voice. But what makes it beautiful are the words by Mehboob. We can hear this continuously without a break. World Music Day 2020 Wishes & Greetings: Twitterati Share Messages, HD Images & Quotes Celebrating the Magic of Music to Mark Fête de la Musique

'Ghar se nikalte hi' is quite popular from this album but that choice might change after you listen to this Sonu Nigam gem. It's more like a lyrical conversation between a father and daughter.

A rare Talat Aziz track in a Hindi movie, this song from Daddy is a heartbreaker as much as the film. Young Pooja Bhatt and distraught Anupam Kher added so much character to this track that you will go crazy about it.

Not many are even aware of this Hansal Mehta directorial. While it's your choice to watch the film, we insist you listen to this youthful and fresh melody. It composed by Shankar-Ehsaan-Loy and written by Javed Akhtar. It is sung by Shaan and Sowmya.

Lata Mangeshkar, R D Burman, Gulzar, Naseeruddin Shah, Shabana Azmi - so many heavyweights in one song. You can only expect a surefire hit. This slow and perfect melody transports you to a different world. It has an amazing power to calm you down.

Yet another movie which many aren't aware of. But this song stayed with us. It's all about despair and yet the composition is pacy and peppy. What an ironic composition!

A lilting, sweet and enchanting romantic song that fills you with whatever love you have in your system. It just leaves you with a lasting impression. Sung by Kshitij Tarey and Chinmayi and composed by Mithoon, this is just purely hearth-felt.

This movie and this song, just don't lose their impact.  A deeply fulfilling film, something every Salman Khan fan worth their salt should watch. This Bombay Jayshree number stirs up a lot of feelings in you. It's a song of hope but not without its strings attached to hurt.

You can thank us later because if you are a music aficionado, you won't be able to stay away from these songs. Sadly, these songs are not heard or discussed much.

(The above story first appeared on LatestLY on Jun 21, 2021 09:16 AM IST. For more news and updates on politics, world, sports, entertainment and lifestyle, log on to our website latestly.com).