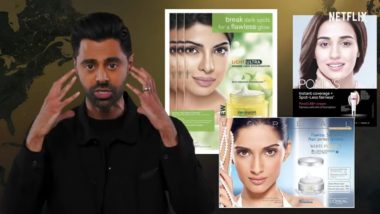 Hasan Minhaj is not new to stir up a controversy in India. He has called out Asian culture, Indian politics in the past as well. His video criticising PM Modi received flak and was even made unavailable on Netflix India. Now, the comedian/activist has ruffled some feathers again. while talking about George Floyd's killing in the US, which has sparked global protests, Hasan called out Asians for their hypocrisy. George Floyd Death: Dwayne Johnson Supports Black Lives Matter Movement, Questions Donald Trump’s Lack of Leadership (Watch Video).

Hasan pointed out how an Arab shopkeeper called the cops on George Floyd. The cop blocking the view while Floyd was killed was a Hmong-American.

To drive the point home, he added, "You know what we call black people? We call them 'kaala', which means black but not in a good way. If someone is dark-skinned in your family, we clown them. We call them 'kallu'."

Maybe now that skin whitening commercials are being criticised on a global platform, our Bollywood stars will a grow a spine strong enough to say decline such endorsement deals.

Actresses like Priyanka Chopra, Sonam Kapoor, Disha Patani are facing flak on social media for talking about 'Black Lives Matter' and how 'All Colours Are Beautiful'. They are all facing criticism on the internet across the board for being a hypocrite. Priyanka, on multiple occasions, has said that she regrets endorsing fairness creams. "I realised I did not like how I felt," she told FirstPost while promoting Baywatch.

Do Not Forget To Check Out This Twitter Thread Calling Out Bollywood Stars For Their Hypocrisy:

List of Indian actors who are speaking on BLM and their fairness cream ads, a thread : pic.twitter.com/yUeRNLch6U

In 2017, Abhay Deol had called out the Bollywood brigade for promoting fairness products. He even got in a war of words with his Aisha co-star Sonam Kapoor, who had admitted that she did those ads when she did not understand the ramifications. But not before she reminded Abhay that his cousin, actress Esha Deol, has promoted such products as well.

Earlier, this year the Ministry of Health and Family Welfare drafted an amendment to Drugs and Magic Remedies (Objectionable Advertisements) Act, 1954. The draft expands the definition of an advertisement to "any audio or visual publicity, representation, endorsement or pronouncement made by means of light, sound, smoke, gas, print, electronic media, internet or website and includes any notice, circular, label, wrapper, invoice, banner, poster or such other documents: Provided that label or wrapper is an advertisement only if it contains any information or claim other than provided in the rules." Fairness Cream Advertisers to be Penalised? Narendra Modi Government Proposes 5-Year Jail & Rs 50 Lakh Fine For Misleading Ads.

Coming back to Hasan Minhaj. The artist tore into Asian hypocrisy on multiple levels. He said, "Asians, we love seeing black excellence, Barack (Obama), Michelle (Obama), Jay Z, Beyonce...how could we be afraid, we love black America. Yeah, on screen, in our living rooms. But when a black man walks into your living room and god forbid wants to date or marry your daughter, you call the cops."

"It is bad to be black in desi culture even though we all wish we were black," he said.

(The above story first appeared on LatestLY on Jun 05, 2020 04:36 PM IST. For more news and updates on politics, world, sports, entertainment and lifestyle, log on to our website latestly.com).