As the unrest continues in the US after the death of George Floyd, Hollywood star Dwayne Johnson is wondering where is US president Donald Trump when "the country is down on its knees, begging, pleading, hurt, angry and frustrated". 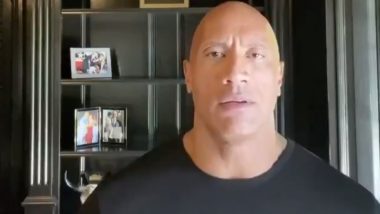 As the unrest continues in the US after the death of George Floyd, Hollywood star Dwayne Johnson is wondering where is US president Donald Trump when "the country is down on its knees, begging, pleading, hurt, angry and frustrated". Johnson took to social media to post a video, showing support to the Black Lives Matter movement and questioning Trump's lack of leadership during country-wide protests, reports variety.com. "Where are you? Where is our leader?" Johnson starts out by asking. He continued: "Where is our leader at this time when our country is down on its knees, begging, pleading, hurt, angry, frustrated, in pain with its arms out, just wanting to be heard?" John Boyega Delivers a Fiery Speech at London Protest Over George Floyd’s Killing (Watch Video)

The actor continued to ask "Where are you?" throughout the video, which is over eight minute long. "Where is our compassionate leader who's going to step up to our country who's down on its knees, and extend a hand and say, ‘You stand up, stand up with me because I got you. I hear you, I'm listening to you. And you have my word that I'm going to do everything in my power, until my dying day, my last breath, to do everything I can to create the change that is needed, to normalise equality because Black lives matter.' Where are you?" Johnson said. Cole Sprouse Says He Was Arrested at Black Lives Matter Protests Held For George Floyd’s Death (View Post)

Although Johnson doesn't refer to Trump by name, his indication is as clear as it can get. The actor feels right now black lives need support. "Of course, all lives matter, but in this moment right now, this defining, pivotal, explosive moment where our country is down on its knees…we must say the words: Black lives matter," he says. Johnson then said: "We must become the leaders we are looking for. I'll ask it one more time: Where are you? Where is that compassionate leader who steps up and takes accountability for his country and all the people in our country? Where are you? I'll tell you what, we're here. We're all here.

The process to change has already begun. You can feel it across our country. Change is happening. It's going to take time. We're going to get beat up. We're going to take our lumps. There's going to be blood, but the process of change has already begun." Floyd, aged 46, died last week after Derek Chauvin, a white police officer, held him down with a knee on his neck though he repeatedly pleaded, "I can't breathe", and "please, I can't breathe". Chauvin has been arrested and charged with three-degree murder and manslaughter.

(The above story first appeared on LatestLY on Jun 04, 2020 03:36 PM IST. For more news and updates on politics, world, sports, entertainment and lifestyle, log on to our website latestly.com).