It is not a great year to be in Warner Bros' legal team. You can imagine the hours they must have been putting in dealing with crisis after crisis. Accusations have been made. Lawsuits might be in the pipeline. A prominent actor has been fired. We're rounding up some of the controversial, headline-grabbing stuff that went down at Warner's this year. 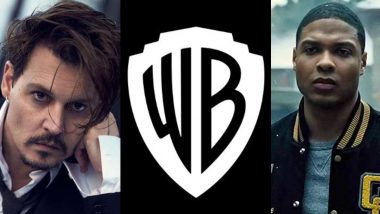 It is not a great year to be in Warner Bros' legal team. You can imagine the hours they must have been putting in dealing with crisis after crisis. The world-renowned studio has stirred quite a few controversies in 2020 that shook everyone. Accusations have been made. Lawsuits might be in the pipeline. A prominent actor has been fired. And worse of all, the studio might also face the wrath of the cancel gang! We are rounding up some of the controversial, headline-grabbing stuff that went down at Warner's this year. Timothée Chalamet Wears 'Legendary' Hoodie After Dune Distributor Warner Bros Announces Controversial Hybrid Release Plan.

The domestic feud between Amber Heard and Johnny Depp not only reached legal grounds, but also the Warner Bros office. After Depp lost a lawsuit against a UK tabloid, which had called him a 'wife beater', the actor was also asked to resign from his role of Grindelwald from the Fantastic Beasts 3. Much to the dismay of quite a few fans.

After Depp was fired, the cancel gang came for Amber Heard. Team Depp is convinced that there is evidence against Heard in the lawsuit, which the studio is ignoring. The actress is the female lead of Aquaman, starring alongside Jason Momoa. An online petition demanding the studio to fire the actress from future DCEU-Aquaman projects has crossed 1.7 million signatures.

However, Amber was recently asked to join the minor reshoots for Justice League's Snyder Cut.

Speaking of the Snyder Cut, Ray Fisher has accused director Joss Whedon of creating a toxic work culture and the studio bosses of shielding the director. Joss took over the directorial responsibilities of Justice League from Zack Snyder after the latter stepped away due to a family tragedy. Whedon changed the majority of the film, affecting the tone. But, the tone was not the only aspect that suffered.

Ray Fisher, who plays Cyborg, in the film, has claimed that Whedon was abusive and toxic on the major reshoots. He demanded an investigation. He also called out the studio for carrying out an unfair investigation into the matter. He has received the vocal support of co-star Jason Momoa.

That's not all. In his supportive Instagram post, Jason also accused the studio of announcing the fake news about his involvement in Frosty The Snowman live-action remake. The actor said this was nothing but a distraction tactic. Jason wrote, "I just think it’s fucked up that people released a fake Frosty announcement without my permission to try to distract from Ray Fisher speaking up about the shitty way we were treated on Justice League reshoots."

Later, Ray also accused the studio of announcing Batfleck's return to the DCEU with The Flash movie as a distraction tactic from the controversy. Ray wrote, "Unfortunately, the fake Frosty news with Jason wasn’t the only PR tactic used to distract from the seriousness of the JL situation. Ben returning as Batman was clearly meant to be revealed at DC Fandome."

Unfortunately, the fake Frosty news with Jason wasn’t the only PR tactic used to distract from the seriousness of the JL situation.

Ben returning as Batman was clearly meant to be revealed at DC Fandome.

I’ll give you one guess as to why @wbpictures likely jumped the gun.

With the pandemic, many movies took the unconventional route of releasing online directory. The list includes tentpoles like Disney's Mulan and Warner Bros' Wonder Woman 1984. Warner Bros announced that the major titles of the 2021 roster including Dune, Godzilla Vs Kong, The Conjuring 3, etc will release online and theatrically simultaneously.

The move might have appeased the audience, increase the subscriptions of HBO Max, but it virtually angered everyone else including directors, producers, actors, and even celebrity agents. Tenet director Christopher Nolan blasted the studio for keeping this move a secret from collaborators until the last minute."It's sort of not how you treat filmmakers and stars and people who, these guys have given a lot for these projects. They deserved to be consulted and spoken to about what was going to happen to their work," Nolan said, while adding the studio is trying to save its fledgeling streaming service.

Dune director Denis Villeneuve also slammed the studio. “With this decision AT&T has hijacked one of the most respectable and important studios in film history. There is absolutely no love for cinema, nor for the audience here,” the filmmaker wrote in an article for Variety. Dune's co-producer studio Legendary Entertainment received silent support from the lead actor, Timothee Chalamet, as he appeared on Saturday Night Live wearing the studio's hoodie.

(The above story first appeared on LatestLY on Dec 13, 2020 08:23 PM IST. For more news and updates on politics, world, sports, entertainment and lifestyle, log on to our website latestly.com).