Adam Levine Birthday: 5 Pictures That Will Give You a Good Look at His Amazing Tattoos (View Pics)

Adam Levine is also a big fan of tattoos and his heavily inked body magnifies his rugged personality. All of Levine’s tattoos are very special for him. They hold great significance and have a story to tell. 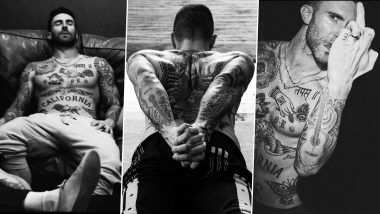 American singer, songwriter, record producer, and actor; there are many hats that Adam Levine has worn throughout his career. While he is popular for being the lead singer of the pop band named Maroon 5, his fans love to spot him in commercials and films. The singer began his musical career in 1994. He was a part of a band named Kara's Flowers. Levine was the lead vocalist and guitarist of this band that split up in 1997 after the commercial failure of their only album, The Fourth World. Years later, the group came back together in 2001 as Maroon 5. Adam Levine’s Nipple-Baring Performance at Super Bowl LIII Creates Uproar, Gets Compared to Janet Jackson’s Career-Ending ‘Wardrobe Malfunction’.

Adam Levine is also a big fan of tattoos and his heavily inked body magnifies his rugged personality. All of Levine’s tattoos are very special for him. They hold great significance and have a story to tell. From the '222' tattoo dedicated to his band Maroon 5 to the “mom” tattoo to honour his mother, here's a good look at his several tattoos on his 42nd birthday.

Check Out Pictures Of His Tattoos Here:

Adam Levine is a proud native Californian and got the word 'CALIFORNIA' tattooed across his abs.  The “lion” tattoo across his lower abs represents royalty and self-confidence.

An Ocean With A Ship

Levine's complex back tattoo has the backdrop of the Mermaid and it was revived by Bryan Randolph of Spider Murphy’s Tattoo San Rafael, CA. This tattoo took around 6 months to complete this tat. Levine also has a guitar tattooed on his arm which is a very obvious one. He is not only a great singer but an incredible guitarist too.

Adam has “Tapas” inked in Sanskrit script on his left peck which means “Meditation Through Penance," austerity, bodily mortification, moral virtue etc. Adam says, “It’s a personal thing. That’s kind of why I put it in a place that’s a bit more hidden.” He also has a black beads tattoo in the form of a necklace decorating his chest which he got when he was in Japan. To express his love for his wife Behati Prinsloo, he got a “True Love” tattoo written across his knuckles.

One of the most appreciated and respected body tattoos that the singer got was the one he got in remembrance of the lives lost as a result of the 9/11 tragedy. The tattoo is an elaborate piece of cherry blossoms and doves inked on his left arm. He also has word 'Mom' and '222' inked on his arms.

As a tribute to his family, Levine got the word 'FAMILY' tattooed on his collar bone. He also got a power inked on the side of his neck. Maroon 5 Lead Singer Adam Levine Apologises to Fans in Chile for Bad Show.

Adam Levine's songs are magic and we hope to listen to more and more of his songs. That and some more amazing tattoos. Join us in wishing the actor a very happy birthday.

(The above story first appeared on LatestLY on Mar 18, 2021 10:10 AM IST. For more news and updates on politics, world, sports, entertainment and lifestyle, log on to our website latestly.com).