Heard and Depp met while making the 2011 film 'The Rum Diary', and later wed in 2015. They broke up in May 2016, when Heard sought a domestic violence restraining order against him, accusing him of abusing her. Depp denied the claims, and the former couple settled their divorce out of court in August 2016. 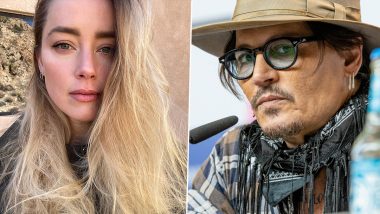 Actress Amber Heard denied she left feces in a bed shared with actor-husband Johnny Depp near the end of their relationship, calling the scenario "disgusting". While testifying, the 36-year-old actress was asked about the instance when Depp said he was shown a photograph of "fecal matter on the bed" after Heard left with friends to go to Coachella back in April 2016, reports people.com. Amber Heard Testifies Against Johnny Depp, Says She Loved Him But Feared For Her Life.

Depp has testified that Heard "tried to blame it on the dogs" but he didn't believe the dropping that he observed in a photograph could have come from their small pets: "I lived with those dogs for many years. ... That did not come from a dog. It just didn't." He also referred to it as a "fecal delivery." He said of his initial response, "I mean... I laughed. It was so outside. It was so bizarre and so grotesque that I could only laugh. So I did not go down there that day."

Starling Jenkins III, a longtime executive chauffeur and security guard for Depp who is still under his employ, previously said under oath in the trial that Heard told him the defecation was "a horrible practical joke gone wrong." During her time on the stand, Heard addressed the scenario, denying that it was an intentional prank and not recalling having a conversation at all with Jenkins about it. She testified that one of their dogs had "bowel control issues" and would often burrow in their beds, sometimes having accidents.

Heard said the dog was on the bed while she was packing, so a bathroom accident could have been overlooked when she and her friend left. When her lawyer Elaine Bredehoft asked if she'd tried to pull a prank on Depp, Heard responded, "Absolutely not." "First of all, I don't think that's funny. I don't know what grown woman does. I was not also in a pranking mood; my life was falling apart. I was at a crossroads in my life. I was really serious," Heard continued. Johnny Depp’s Lawyer Camille Vasquez Cross-Examines Amber Heard About Alleged Physical Assault, Asks ‘Mr Depp Is Your Victim, Isn’t He?’

"And I had just been attacked on my 30th birthday by my violent husband with whom I was desperately in love and knew I needed to leave. It was not really a jovial time, and I don't think that's funny. Period. That's disgusting." She also said Depp accused her of having one of her friends leave the poop in the bed as a prank. "I tried to point out how that didn't make any sense.... My friends wouldn't do that.

"That's not something a bunch of 30-year-old women think is funny. What is he talking about?" When Depp was "going on and on" about the incident, Heard said she wanted to "move on and talk about the issues that we should be talking about." She continued, "Our marriage was over and falling apart in front of our eyes, we hadn't seen each other in over a month and his mom had just passed. I couldn't believe he wanted to talk about feces."

Heard and Depp met while making the 2011 film 'The Rum Diary', and later wed in 2015. They broke up in May 2016, when Heard sought a domestic violence restraining order against him, accusing him of abusing her. Depp denied the claims, and the former couple settled their divorce out of court in August 2016.

(The above story first appeared on LatestLY on May 17, 2022 01:03 PM IST. For more news and updates on politics, world, sports, entertainment and lifestyle, log on to our website latestly.com).