Anna Faris is super happy for her ex-husband, Chris Pratt as he wed Katherine Schwarzenegger. 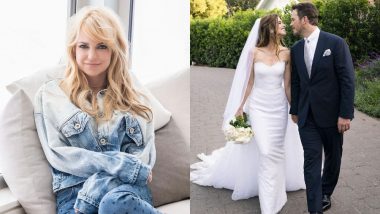 As per a source close to Faris, “Anna has the utmost respect for Katherine and Chris and loves that they found each other and are in love. It gives her a warm feeling knowing that a person like Chris has found happiness again. Anna loves Chris and everything they have shared with each other.” While speaking to HollywoodLife, the source further added, “She wants nothing more than to see Chris happy.” Chris Pratt Jokes That He Apparently Downed 12 Lbs Of Wedding Cake As He Married Katherine Schwarzenegger!

The Mom actress has been very supportive when it comes to Chris and Katherine's relationship. A source also said, “Anna wants everyone to be happy, and she’s even dating herself! So, she completely signs off on the marriage and loves that Katherine will be another mother figure in Jack’s life.” Chris Pratt and Katherine had an intimate wedding ceremony that took place in Montecito, California on June 9. Chris Pratt And Katherine Schwarzenegger To Have An Intimate Wedding! Will Anna Faris Be Invited?

Yesterday was the best day of our lives! We became husband and wife in front of God, our families and those we love. It was intimate, moving and emotional. We feel so blessed to begin this new chapter of our lives. We are so thankful to our families and our friends who stood with us and grateful to Mr. Giorgio Armani who created a once in a lifetime dress for Katherine to wear and for me, the perfect suit. This morning we feel nothing but blessed.

Present at their wedding were Katherine's parents Maria Shriver and Arnold Schwarzenegger, her brothers Patrick and Christopher, as well as sister Christina. Pratt's besties Rob Lowe was also present at the wedding with his sons Johnny and Matthew. It was a beautiful wedding which kind of cost Chris Pratt some extra weight which he gained thanks to the wedding cake! Well, as he made his first appearance post marrying Katherine, he did state that needs to shed all the wedding weight.

(The above story first appeared on LatestLY on Jun 13, 2019 10:42 AM IST. For more news and updates on politics, world, sports, entertainment and lifestyle, log on to our website latestly.com).