Aquaman 2: THIS Game of Thrones Actor is Reportedly Joining Jason Momoa in the Sequel Of His Superhero Movie

Can you guess this Games of Thrones character who may share the screen space with Jason Momoa in Aquaman 2? 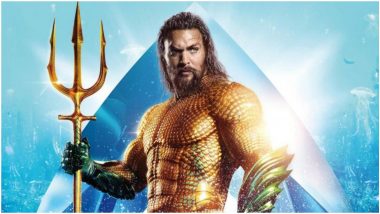 While DC fans are still digging Zack Snyder's Justice League, the film that was finally released by DC on its OTT platform, here comes another major update from one of its superhero movies. Jason Momoa's Aquaman was a big hit at the box office and its sequel is currently in works at Warner Bros and the studio has great plans for the same. Apparently, the makers have even roped in a new name for this sequel and he's none other than Pilou Asbaek. Aquaman 2 at DC Fandome: Director Says Sequel Will Be More Serious and Relevant, Patrick Wilson Confirms Return as Ocean Master.

Yes, for those who are well acquainted with HBO's very famous series, Game of Thrones would know who Pilou is. He played the ruthless Euron Greyjoy in the show and was highly praised for his evil act. His character had entered the series during season six and soon became a regular. As per Deadline's report, Pilou is the new member to join Jason for the Aquaman sequel but details of his role are still kept under wraps. He could play the next antagonist in the movie or a totally different character, our guess is as good as yours. The movie is expected to go on floors in December this year. Jason Momoa's Aquaman 2 Gets a Release Date, Will Hit the Screens On December 16, 2022.

Speaking of Aquaman 2's casting, it's still unclear if the studio will retain Amber Heard after her messy legal battle with her ex-husband, Johnny Depp. His fans are actively petitioning for Warner Bros to replace her with another actress but the studio is yet to take a call on that. Director James Wan will return to the director's seat for the sequel as well as DC fans are expecting another blockbuster in the making.

An official confirmation on Pilou Asbaek's casting is still awaited!

(The above story first appeared on LatestLY on Apr 19, 2021 11:10 PM IST. For more news and updates on politics, world, sports, entertainment and lifestyle, log on to our website latestly.com).