Zack Snyder's Army of the Dead will release at the theatres in USA on May 14, followed by a premiere on Netflix on May 21. And well, the early reactions to the flick are out and they look quite positive. Check out some of the top reviews that see the movie winning critics' hearts. 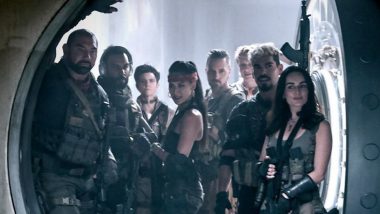 Zack Snyder's Army of the Dead will release at the theatres in USA on May 14, followed by a premiere on Netflix on May 21. And well, the early reactions to the flick are out and they look quite positive. The zombie-action thriller has been called a 'fun ride' by the critics. The film stars Ella Purnell, Omari Hardwick, Ana de la Reguera, Theo Rossi, Dave Bautista, Nora Arnezeder, Huma Qureshi among others.  Army of the Dead Trailer Out! Zack Snyder’s Zombie Film Starring Dave Bautista and Huma Qureshi Makes Undead Look Awesomely Terrifying! (Watch Video).

Check out some of the top reviews that see the movie winning critics' hearts.

Deadline: "It took a trip backwards to the spirit of his 2004 zombie flick Dawn of the Dead for Zack Snyder to finally reclaim his groove, but that he has done with Netflix’s super Army of the Dead, which can probably best be described as The Walking Dead meets Ocean’s 11, with a touch of Escape From New York and The Dirty Dozen thrown in for good measure. What Snyder clearly is showing with this near-two-and-a-half-hour epic of the undead is that he is capable of once again having fun making this stuff, and by extension making sure we have a blast too. Maybe it was just getting away from the DC comic book canon over at Warner Bros that has unleashed his inner movie geek again, but I will take this Army over the likes of his too dark and uneven dips into the worlds of Batman, Superman, Watchmen and the newly bloated Justice League — and definitely over the misfire of Sucker Punch."

Variety: "The film’s limitation — you knew there was a catch coming! — is that as solid a chunk of oversize diversion as Army of the Dead is, most of it still has a kind of second-hand quality. At one point, after our zombie-killer heist squad has entered the trashed streets of Vegas, we see the wrecked but still standing Statue of Liberty, an image it’s hard not to notice without flashing back to the ending of 'Planet of the Apes,' a moment that singlehandedly launched the genre of cinematic dystopia. In that fabled scene, the Statue was a haunting remnant of human civilization."

The Hollywood Reporter: "The opening 14 minutes of Zack Snyder’s deliriously enjoyable return to zombie mayhem, Army of the Dead, are a marvel of swift exposition. The pre-credits sequence lays the foundations for prequels to come by revealing the escape just outside Las Vegas of an undead super-specimen, a zombie “patient zero” who appears to be the result of military experimentation. Then, over main titles in dazzling neon pink, Sin City is ravaged by marauding zombies, their onslaught eventually curbed by hardass civilian characters who pause for photo portraits."

Not all reviews are positive though. Check out this one critical opinion.

The Guardian: "Army of the Dead arguably has a gonzo excess, and a certain kind of end-of-the-world spectacle, maybe borrowed from Planet of the Apes; that could be down to the famous Vegas scale-replica of the Statue of Liberty. But there is something weirdly and oppressively uninspired in this CGI world; a continuous two-and-a-half hour splurge of generic zombie content which itself feels a bit zombie-ish. With a Vegas heist movie like Ocean’s Eleven, there were a few brain cells in play – at least theoretically. People had to be outsmarted. Strategy had to be deployed. Double-crosses had to be disclosed and apparent betrayals revealed to be part of the plan."

Zack Snyder had made his debut in Hollywood with the 2004 film Dawn of the Dead, and many still believe that remains his best work to date. Looks like zombies are a lucky charm for the director as going by the above reviews, we feel that Army of the Dead is no exception. With this, all we can suggest is that definitely watch the movie if you are a lover of thriller genre.

(The above story first appeared on LatestLY on May 11, 2021 09:53 PM IST. For more news and updates on politics, world, sports, entertainment and lifestyle, log on to our website latestly.com).