As Kylie Minogue Celebrates Her 52nd Birthday, Let's Revisit 5 of Her Most Sensational Songs 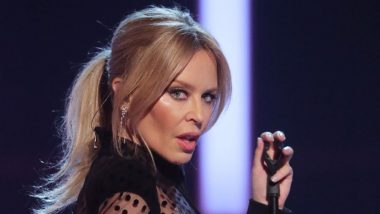 As Kylie turns a year older, we take a look at some of her best songs (picture credit - Instagram)

Kylie Minogue turns 52 today. At the onset of the '90s, the talented singer metamorphosed into a pop Goddess. She remains one of the few pop sensations that did not fade away. Out of sight, out of mind did not apply to her. Kylie started off her career as an actress on a soap opera, Neighbours, in Australia. The show gained popularity in the UK and when the actress turned singer released her single, I Should Be So Lucky, it was time for British pop stars to run for the money.

Kylie is currently working on her 15th studio album during the quarantine due to novel coronavirus outbreak. She is learning new music software. In her home studio, she is leaning to engineer and record her own songs. Kylie Minogue Birthday Trivia: Did You Know How Much the International Pop Singer Was Paid to 'Chiggy Wiggy' With Akshay Kumar in Blue?

And call it a reminder of why we should desperately wait for her next album or a birthday tribute, but here are our top 5 Kylie Minogue songs that everyone should listen to.

Can’t Get You Out Of My Head

I Believe In You

Maybe, musically Kylie Minogue's Slow might not be the best choice. But if it isn't the sexiest music video ever.

SO, those were some of our favourite songs by Kylie. It took us all the efforts in the world to not include Chiggy Wiggy on the list. It is a super cheesy song that she sang for a Bollywood film, which she also appeared in. A very happy birthday, Kylie.

(The above story first appeared on LatestLY on May 28, 2020 12:23 PM IST. For more news and updates on politics, world, sports, entertainment and lifestyle, log on to our website latestly.com).