Imagine Dwayne Johnson joining the Marvel Cinematic Universe! Not that we all have not already imagined it. 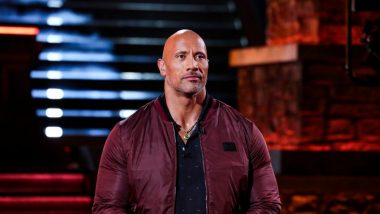 Imagine Dwayne Johnson joining the Marvel Cinematic Universe! Not that we all have not already imagined it. But for the first time, someone who runs at close quarters with the studio has actually talked about the possibility. Avengers: Endgame director, Anthony Russo was at the 2019 MTV Movie Awards when he was asked to say what superhero would Dwayne play if he was in the MCU and his answer doesn't really come as a surprise. "The superhero that I would most like The Rock to play is The Rock. He is the best version of him," he said.

We have to say that is quite a smart reply. Not only Anthony dodged the question but somehow managed to answer it as well. Chances are slim that Dwayne would appear in a Marvel movie as he has already been confirmed to be playing the title role in the DC movie, Black Adam. Dwayne Johnson and Jason Statham’s Hobbs & Shaw Bhojpuri, Punjabi, Gujarati, Marathi Trailers Are LIT – Watch Video.

Check out Dwayne Johnson's award acceptance speech at the MTV:

On the work front, Dwayne will be next seen going at loggerheads with Jason Statham in the Fast and Furious spin-off Hobbes and Shaw.  The actor also wrapped up shooting for Jumanji: Welcome to the Jungle sequel, which will release in theatres in December this year. Jungle Cruise won't land in theatres until July 2020. Black Adam has only found its director in Jaume Collet-Serra recently and the movie is yet to go on floors. The actor has also hinted that he might not reprise his role in Fast and Furious 9.

(The above story first appeared on LatestLY on Jun 19, 2019 02:13 PM IST. For more news and updates on politics, world, sports, entertainment and lifestyle, log on to our website latestly.com).