The news of Scarlett Johansson and Colin Jost's engagement has been confirmed by the actress' publicist. 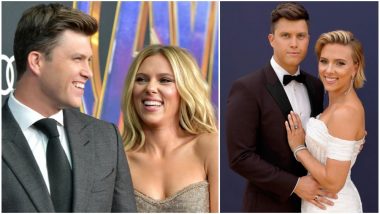 The news of Hollywood actress Scarlett Johansson’s engagement came as a surprise to many. The Avengers: Endgame star is now officially engaged to her longtime boyfriend, Colin Jost. Scarlett and the Saturday Night Live star have been dating for two years. Ever since the announcement has been made, congratulations are in order for the couple from fans and close pals. Jennifer Lopez Engaged to Alex Rodriguez: J.Lo’s Massive Engagement Ring Is What a Dream Looks Like! Here’s How Much the Diamond Is Worth.

The engagement news of Scarlett Johansson and Colin Jost has been confirmed to the Associated Press by the former’s publicist. Marcel Pariseau revealed that the couple has been engaged officially after dating for two years. The publicist also mentioned that the wedding date is yet to be finalised. The couple was seen together at the premiere of Avengers: Endgame. Scarlett plays the role of Black Widow in the superhero film. Their pictures from the red carpet took the internet by storm. Gossip Girl Fame Blake Lively Flaunts Her Baby Bump at the Screening of Husband Ryan Reynold’s Pokemon Detective Pikachu.

Checkout some of the adorable pictures of the newly engaged couple

This will be the third marriage for Scarlett Johansson. The actress was first married to Canadian actor Ryan Reynolds. The duo tied the knot in 2008 and parted ways in 2011. Three years later, Scarlett married Frenchman Romain Dauriac with whom she also has a baby girl, Rose Dorothy Dauriac. Roman and Scarlett got hitched in 2014 and in 2017 they got divorced. It was in the same year the news splashed that the actress is in a relationship with Saturday Night Live fame Colin Jost. This would be the first marriage for Colin. Heartiest congratulations to Scarlett and Colin!

(The above story first appeared on LatestLY on May 20, 2019 09:16 AM IST. For more news and updates on politics, world, sports, entertainment and lifestyle, log on to our website latestly.com).