Bloodshot Movie Review: Vin Diesel Is an Indestructible Superhero (Again), but This Time With Red Eyes and No Charm

Bloodshot is superhero film based on the Valiant Comics character of the same name and is directed by David SF Wilson. The film stars Vin Diesel, Eiza González, Sam Heughan, Toby Kebbell, and Guy Pearce. 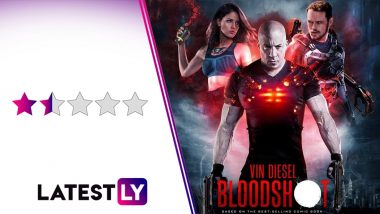 Bloodshot Movie Review: Not content with saying 'I am Groot' in MCU in all ways possible, Vin Diesel is back on the big screen with Bloodshot; this time, playing a superhero that looks like Vin Diesel, and not a tree. Bloodshot, directed by David SF Wilson, is based on the character from Valiant Comics and has the Fast & Furious star play the titular superhero, even though I don't remember anyone calling him by that name. I mean, if someone goes in watching the film without knowing its base, won't they wonder why the film is called Bloodshot and not 'Dom Toretto With Red Eyes and Glowing Rib-Cage'? Vin Diesel's Bloodshot Is a Grounded Superhero Movie Claims Director Dave Wilson.

When we first see him, Ray Garrison (Vin Diesel) is a US Marine, who returns home to his wife Gina (Talulah Riley) after solving a hostage crisis in Kenya. While vacationing, both Ray and his wife are abducted and killed by a mysterious baddie called Martin Axe (Toby Kebbell).

Ray is, however, resurrected by a lab called RTS, headed by Dr Emil Harting (Guy Pearce). Let me also mention here that Harting has a robotic hand, and you know how characters with robotic hands turn out to be. Anyway, Harting and his vet KT (Eiza González) brief Ray on his second life - he is now an unbeatable killing machine. He has something called nanites in his body that give him regenerative powers, while also working like an internet database.

While Ray tries to come to terms with his new life, he remembers his own murder in the past life and seeks revenge. But there is more to the vendetta saga and his powers that Ray hasn't been told of.

Now I am not very well-versed about the Bloodshot lore, so I am clueless about how faithful is the movie adaption. From what I can figure out here is that Vin Diesel's superhero is basically like Wolverine without the claws. Or hair. Or Deadpool without the snark. Or Dominic Toretto, without cars. Or Lucy without Scarlett Johansson. Or Robocop, without the metal. Or...okay, you get the  point. Bloodshot: Vin Diesel Reveals How Difficult It Was Playing Ray Garrison’s Character for the Upcoming Film.

The problem with Bloodshot is not that the superhero's superpowers or story aren't anything new. It is actually fun to see Vin Diesel be one; at least he has an excuse of why his character is alive after dodging bullets and falling off from great heights.

Watch the Trailer of Bloodshot:

What's not excusable is how lazy is the film's writing, execution and performances. There is no clear explanation as to what is the villain's endgame and why they didn't have a fail-safe backup when their subject goes rogue. Or why not use the ones they already have on hand, at the right moment. Bloodshot garners some interest when it is revealed how the protagonist is deceived by Harting's simulation in taking down his enemies. Only if, this 'best' part wasn't spoilt in the trailers itself. Or is itself inspired by Memento, that, incidentally, also has Guy Pearce as an amnesiac killer on vendetta spree, and gets a reboot every now and then. There is also a secondary antagonist in Jimmy Dalton (Sam Heughan), a former soldier with cybernetic legs, whose attempts to be a bully feel forced and awkward. Not to mention, some really droll performance from the actor.

There is so much happening on the screen, especially after the big reveal, but the film can't get rid of the monotonous feel throughout. The action scenes are shoddily shot, with the first major scene shrouded in so much darkness as if the movie also expects the viewers to be Bloodshot. The CGI is awful in certain places, especially in the climax.

As for Vin Diesel, the actor drones through the film with the usual motions, as if he is waiting for the next F&F movie to arrive while he basks on the paycheck of this one. Eiza González nails the part of the hot-looking second lead, whose conscience gets the predictable prick in time. There is also New Girl fame Lamorne Morris, who is partly hilarious, partly annoying as the super-brainie techie.

- Guaranteed to Leave You With Bloodshot Eyes!

Like The Mummy was supposed to kickstart a cinematic universe of monsters, similarly, Bloodshot was to do that with Valiant Comics. Why do I have this feeling that Vin Diesel's superhero outing is going to meet the same fate as Tom Cruise's misguided supernatural outing? Well, at least, we will always have Groot!

(The above story first appeared on LatestLY on Mar 12, 2020 09:40 PM IST. For more news and updates on politics, world, sports, entertainment and lifestyle, log on to our website latestly.com).