Pitt's turn as Fauci comes weeks after the director of the National Institute of Allergy and Infectious Diseases was asked who he would like to impersonate him on SNL. 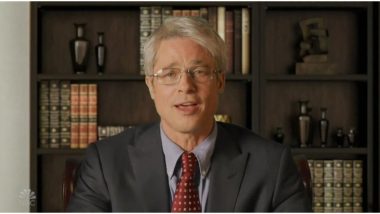 Los Angeles, Apr 26 (PTI): Oscar-winner Brad Pitt portrayed White House infectious disease expert Dr Anthony Fauci in the latest 'At Home' version of Saturday Night Live and tried to set the record straight regarding President Donald Trump's remarks on the coronavirus outbreak. The NBC late-night comedy sketch show was back with cast members collaborating from home amid the COVID-19 pandemic. Chris Hemsworth Recalls Meeting Brad Pitt at Premiere of 'Once Upon a Time in Hollywood'.

After playing weatherman on John Krasinski's new YouTube show "Some Good News", Pitt turned Fauci where he tried to clarify some of President Donald Trump's comments during the daily White House coronavirus task force briefings. "Yes, the president has taken some liberties with our guidelines. So tonight, I would like to explain what the president was trying to say," Pitt said in the video shared on "SNL"'s Twitter page.

The Hollywood star then showed a video of Trump ad-libbing at a briefing, and saying there would be a vaccine for the deadly virus "relatively soon". Pitt's Fauci started by clarifying that when Trump said, "everyone can get a test, what he meant was almost no one". Another clip of the POTUS played saying his administration had done an "incredible job" and COVID-19 will "disappear one day, like a miracle". Dr Anthony Fauci Jokes Brad Pitt Should Portray Him in 'SNL' Sketch.

"A miracle is great. Who doesn't like miracles? (But) Miracles shouldn't be Plan A," the actor said. Pitt's turn as Fauci comes weeks after the director of the National Institute of Allergy and Infectious Diseases was asked who he would like to impersonate him on "SNL".

"Oh, Brad Pitt, of course," Fauci jokingly told CNN's Alisyn Camerota who gave him option between the Once Upon a Time in Hollywood star and Ben Stiller.

Fauci has become a household name for his matter-of-fact delivery of information during White House press conferences amid the pandemic Removing his wig and dropping the expert's accent, Pitt concluded his set to thank the real Fauci. Did Brad Pitt Persuade Angelina Jolie to Opt for ‘Traditional Schooling’ for Their Kids?

"To the real Dr Fauci, thank you for your calm and your clarity in this unnerving time," he said. The actor also thanked healthcare workers and announced that the show was "sort of" live from New York. Tom Hanks hosted the inaugural "SNL At Home" which aired on April 11 with a musical performance by Coldplay's Chris Martin.