As for Theron's Hollywood career, the actress started off with films such as The Devil's Advocate, Mighty Joe Young among others. Although it was her performance in films such as Monster and High Country that won her high praise. 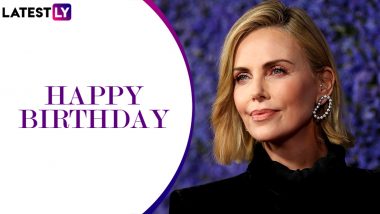 Charlize Theron is without a doubt one of Hollywood's most talented actresses. Theron has done everything from romance to action and aced it all. Not only are on-screen personas amazing but also her off-screen personality. Charlize is known for being a fierce activist as well. She is one of the highest-paid actresses in Hollywood and never fails to use her voice and speak about important societal issues. As for Theron's Hollywood career, the actress started off with films such as The Devil's Advocate, Mighty Joe Young among others. Although it was her performance in films such as Monster and High Country that won her high praise. The Old Guard 2: Charlize Theron Hints at a Sequel to Her Netflix Film.

As the actress celebrates her birthday on August 7, we look at some of her most kick-ass roles and trust us, the actress has many. She has won several accolades for her acting and some of the big ones include Academy Award for Best Actress for her role in 2004 film, Monster. She has bagged Oscar nominations for films such as North Country and Bombshell. As we celebrate the actress' birthday, here's looking at her best films.

The recently released Netflix film is an action drama that ticks all the right boxes and gives us Theron in a role that she can truly take to the next level. This is a role worthy of her and she does manage to shine in it as an immortal warrior. If you haven't watched this yet, well there's no better time than now to stream this one on Netflix.

Is there anybody else who could pull of the role of Furiosa as amazingly as Charlize? We certainly don't think so. Not only did she totally rock that amazing shaved-head look but also blew us over with her badass act. The actress recently mentioned how it was a little 'heartbreaking' that she won't return for Fury Road and we are certainly disheartened too.

Considered to be one of Charlize Theron's best roles, the film stars her as Aileen Wuornos, a longtime sex worker who turns into a serial killer. Theron was unbelievable in this film and if you are fan of the actress, we bet this is one of your top films featuring her.

In Bombshell, it almost seems hard to recognise Charlize Theron considering how brilliantly she transforms into Fox News' Megyn Kelly. Theron put up a fabulous act in the film that tells the story of the takedown of Fox News honcho Roger Ailes after he's accused of sexual harassment at the workplace.

The film is all about its badass female protagonist and with Theron on board, it is impossible to look away from her. Charlize gives a thrilling performance with some kickass action and you truly see that she's fit for the role in all senses. As Lorraine Broughton, she's hard to forget. Charlize Theron Is Still Very Open to Love, But Adds, 'I Get Myself in Trouble Every Time I Talk About This'.

(The above story first appeared on LatestLY on Aug 07, 2020 09:20 AM IST. For more news and updates on politics, world, sports, entertainment and lifestyle, log on to our website latestly.com).