Chris Hemsworth Likely to Return with Extraction Sequel for Netflix

Chris Hemsworth's Extraction has surely impressed his fans and its initial success has prompted the makers to plan a sequel to it. The talks with Netflix are already on. 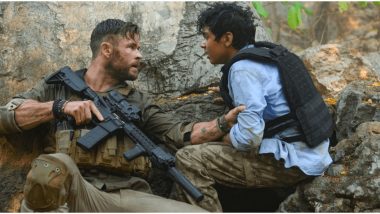 Chris Hemsworth's Extraction received some positive reactions from the OTT platform's audiences and his fans couldn't stop raving about his new outing. In fact, Joe Russo believes this is Hemsworth's finest performance to date and planning a sequel at this point does sound like a wise idea. Of course the chances of having a sequel depended on the original's success and now that viewers are raving about this gritty thriller, there's no reason why they shouldn't think about a possibility. Extraction: From Chris Hemsworth and Randeep Hooda's Stunts to the Bengali Rap Song, Russo Bros' Netflix Film Gets a Rave Response on Twitter.

As per reports in We Got This Covered, Netflix had already signed a deal for sequels with Russo Brothers provided their first outing is successful. And with positive reactions coming from all over the world, they are most certainly going ahead with their plans of coming up with a sequel and the film's curious ending leaves some scope for Hemsworth's return. While the actor was shown dead (spoilers) in the climax of Extraction, Ovi sees someone watching him from the edge in the pool. Exclusive! Extraction Actor Priyanshu Painyuli Narrates His Funny Meeting With Joe Russo (Watch Video).

It's safe to deduce that Hemsworth is well and alive as the makers had dropped enough hints about how he could have survived a fall in the river. And while the sequel will see him return, his killer, the young boy who worked as a henchman for the villain will also return as the main antagonist in the sequel. Part two will reportedly involve a time jump and will them coming face-to-face once again. The plot's ready and the actor too, so let's hope an official announcement comes our way very soon.

(The above story first appeared on LatestLY on Apr 27, 2020 11:43 AM IST. For more news and updates on politics, world, sports, entertainment and lifestyle, log on to our website latestly.com).