With every film, Nolan has outdone himself and is always ready to blow our minds with his genius. The British-American director's work has been recognised by the Academy and every prestigious award function in various categories. 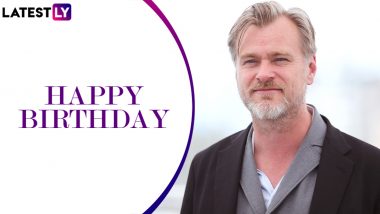 Considered to be one of Hollywood's legendary filmmakers, Christopher Nolan is the genius mind behind films such as Inception, Dunkirk, The Prestige and more. The director's upcoming film Tenet has been one of the most-anticipated films of the year though coronavirus is playing spoilsport and making us wait for this intriguing film even more. With its many delays, the film is expected to hit the screens by September and well, till then, we sure have a lot of time to brush up on our Nolan knowledge by catching his older films. The director celebrates his birthday on July 30 and as he turns 50, we can't think of a better way to celebrate his work by re-watching his films and reliving the brilliance of his ambitious work. Tenet First Reactions: IMAX Employees Mind Blown By the Christopher Nolan Film, Call It 'Beautifully Made'.

With every film, Nolan has outdone himself and is always ready to blow our minds with his genius. The British-American director's work has been recognised by the Academy and every prestigious award function in various categories. Nolan's technical department is known to have swept awards for his some of his best works. You'll be thrilled to know that the director's works till now have cumulatively gained 34 Oscar nominations and ten wins. As we celebrate Christopher Nolan's birthday, here's looking at where you can watch his best films.

One of Christopher Nolan's most acclaimed films, The Prestige consisted of some of the finest performances by Hugh Jackman and Christia Bale along with Scarlett Johansson. The film revolved around two friends and fellow magicians turn rivals following a sudden tragedy. If you haven't watched it yet, one of Nolan's best work is available to stream on Prime Video.

With a concept such as dream heist, there couldn't be anyone other than Christopher Nolan who could weave a film that truly blows your mind every time you watch it. Starring Leonardo DiCaprio, Ellen Page, Cillian Murphy and Tom Hardy in key roles, the film left everyone who watched it with a string of questions. There's no definite number of times that you can watch this film and we bet every time, you'll find a new reason to catch it. The film is available for streaming on Prime Video.

Learning quantum physics may not be your cup of tea but when introduced in a story like that of Interstellar, it is hard to not get intrigued and become a science nerd just for a bit. Nolan truly outdid himself with the sheer brilliance that he managed to achieve with this film. Starring Matthew McConaughey, Anne Hathaway, Jessica Chastain, Bill Irwin, Ellen Burstyn, Matt Damon, and Michael Caine, the film is one of the most-loved works among Nolan fans.

It is available for streaming on Prime Video.

We'll never be able to thank Christopher Nolan enough for giving us Christian Bale in the role of Batman. While many may debate over who's played the caped crusader best, Bale does remain at the top for many. Nolan's Batman trilogy consisting of Batman Begins, The Dark Knight and The Dark Knight Rises is one of those that you can't get enough of. From Heath Ledger's Joker to Tom Hardy's Bane, casting, performances and every little detail in these films has been spot on. The trilogy is available for streaming on Prime Video. Christopher Nolan's Tenet Gets a New Release Date 'Again', Will Now Release in Select Countries on August 26 and in USA on September 3.

Is there anything Christopher Nolan can't do? From space movies to comic-book based films to a war drama, he has done it all. Nolan's 2017 film set in World War II, revolved around soldiers of the British Empire, Belgium and France forces trying to evacuate from the town of Dunkirk whilst fighting the German forces. The combat thriller almost had us live the horrid experience thanks to Nolan's brilliant direction. Dunkirk is available for streaming on Prime Video.

Christopher Nolan's earlier films such as Memento, Following, Insomnia are not available for streaming on any platform but can be bought on the Google Playstore. We wish the ace director a very Happy Birthday and can't wait to experience the marvel that his upcoming film Tenet will be.

(The above story first appeared on LatestLY on Jul 30, 2020 02:17 PM IST. For more news and updates on politics, world, sports, entertainment and lifestyle, log on to our website latestly.com).