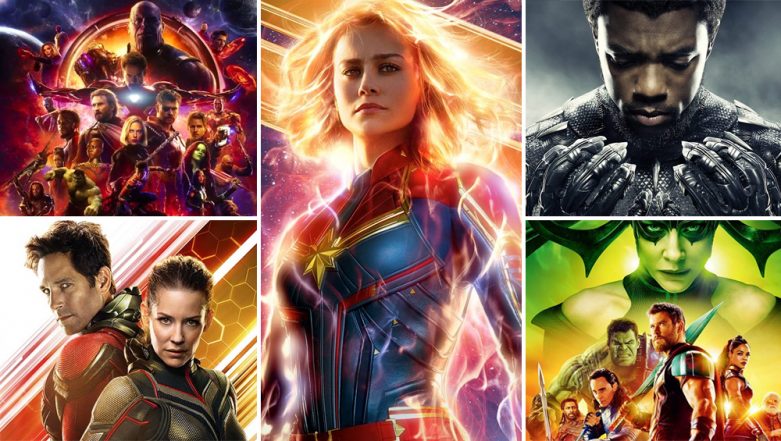 Marvel movies have always been the most anticipated Hollywood superhero movies for the Indian crowd. While the fans were thrilled with the release of Brie Larson-starrer Captain Marvel, the movie has managed to score big at the Indian box office collection. The movie has already taken a big leap above its expected ground on the first day and became the second highest grossing Hollywood movie after Avengers: Infinity War. The superhero movies have never failed to impress the fans and managed to lure them to the nearest cinema screens. Captain Marvel: 5 Interesting Questions About Marvel Cinematic Universe That Brie Larson’s Superhero Film Gives You Answers For! (SPOILER ALERT).

Have a look at the Day 1 Box Office Collection of the last five Marvel Movies in India:

The third instalment to the Marvel Thor Series, Thor: Ragnarok, released on November 2, 2017. Chris Hemsworth-starrer superhero movie raked Rs 9.91 crore at the Indian box office on its opening day. It became the film that crossed the all-time India theatrical hauls of both previous movies in the opening weekend itself. It also became the fifth Marvel film to reach the top 20 among Hollywood’s biggest earners in India.

Directed by Creed fame Ryan Coogler, the Chadwick Boseman-starrer Black Panther, which released in February 2018, had made a roaring success at the Indian Box Office collection. The movie was highly praised for its frank discussion of political and racial themes, action choreography, high technical values and the performances. Black Panther opened with a storming Rs 5.60 crore collection in India, beating Deadpool and Wonder Woman. Captain Marvel Movie Review: Brie Larson's Superhero Outing is Impressive and the Future of MCU Seems to be in Good Hands.

Avengers: Infinity War, released in April 2018, became the highest grossing Hollywood movie in India. The movie was the culmination of the 18 movie journey that came before it, starting with 2008’s Iron Man, and it earned that way! The movie collected Rs 40.13 crore on its Day 1. The movie also became the second highest grossing movie in India of the year until May. Avengers: Infinity War had collected Rs 192.28 crore by the end of its second-week run.

Despite not having any perennial favourites of Iron Man, Captain America, Thor and Spider-Man, this Marvel movie had a really good start. Released in July 2018, Ant-Man and The Wasp had collected Rs 5.05 crore at the box office in its opening day in India. However, compared to the general Marvel standards, the Paul Rudd and Evangeline Lilly’s superhero film saw a slight dip. Captain Marvel: The Post-Credit Scenes Details of Brie Larson’s Superhero Film Are Out and They Have an Avengers EndGame Connection (SPOILER ALERT).

Continuing the Marvel legacy, Captain Marvel has hit big at the box office collection in India. The movie garnered many appreciations from the critics and audiences alike, and managed to become the second biggest Hollywood opener after Avenger: Infinity War. Starring Brie Larson in the lead, the film recorded Rs 12.75 on its Day 1, and despite clashing with Amitabh Bachchan and Taapsee Pannu-starrer Badla, the movie’s charm remained intact.