Demi Lovato, Ruby Rose, Elliot Page - 7 Hollywood Celebrities Who Are Breaking The Gender Mould And How!

From Demi Lovato to Elliot Page, here's a list of a few prominent stars who've publicly announced that they are beyond the usual male-female pronouns. Read on. 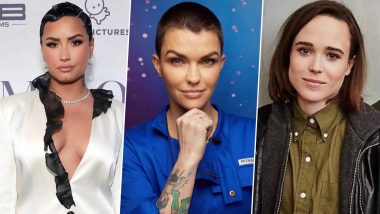 Over the years, many Hollywood celebrities have come out of the closet. While some have identified themselves as trans, there are also a few who do not identify as male or female. The latest example of this can be Demi Lovato, who took to social media and announced that the singer is non-binary. Well, trust us, to see a celebrity embracing gender fluidity and challenging the gender norms is satisfying to another level. And so, let's check out a few prominent stars who've publicly announced that they are beyond the usual male-female pronouns. Demi Lovato Comes Out As Non-Binary; Singer Announces Change of Pronouns to They/Them.

May 19 is the day when Demi announced that they are non-binary. Along with it they also mentioned that from now on everyone should denote the singer with they/them pronouns. "Sharing this with you now opens another level of vulnerability for me," a part of her post read.

In one of the interviews with actress Jameela Jamil, the singer revealed that "I'm not male or female. I think I float somewhere in between."

This diva is loved by fans for being amazingly positive on Netflix's show, Queer Eye. Earlier, in an interview with Out Magazine, Van Ness had said, "The older I get, the more I think that I’m nonbinary — I’m gender non-conforming. Like, some days I feel like a man, but then other days I feel like a woman. I don’t really — I think my energies are really all over the place."

Younger star Nico Tortorella has been open about their identity for a very long time. For the unaware, Tortorella and their better half, Bethany C Meyers, are both gender fluid and their marriage is polyamorous. Now, that's what we call breaking the gender mould. National Coming Out Day: Inspiring Celebs Who Came Out of the Closet and Embraced Their LGBTQ Identities.

It was in a Tumblr post in 2016 when Amandla first came out as non-binary. Since then, they have been very much vocal about this. In 2018, they told the Washington Post that they "didn't need those pronouns to feel comfortable... And it felt almost detrimental to those who really did need them."

"I am very gender fluid and feel more like I wake up everyday sort of gender-neutral," The former Batwoman star had told News Corp Australia. In 2014, they also released a short film about gender roles, Trans, and what it is like to have an identity that deviates from the status quo.

Page came out as a lesbian in February 2014 and later as trans in December 2020. In March 2021, he became the first openly trans man to appear on the cover of Time magazine. Woah!
View this post on Instagram

These celebrities are bold and prove that there's no hiding from one's inner self. We live in 2021, and it's about time that labels should be passé. Kudos to the above stars for saying it loud and being proud of oneself. Stay tuned!

(The above story first appeared on LatestLY on May 19, 2021 07:59 PM IST. For more news and updates on politics, world, sports, entertainment and lifestyle, log on to our website latestly.com).