Emma Watson Birthday: Apart From the Harry Potter Saga, 4 Film Adaptations Of Famous Books That the British Actress Starred In

While her act as Hermione was so perfect that we cannot imagine anyone else pulling off the same, there's no denying that Watson has performed equally well and given some remarkable performances outside the Harry Potter series. 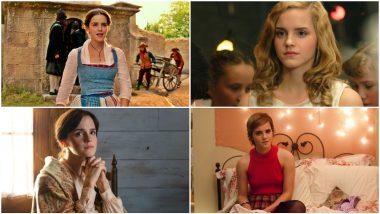 Emma Watson rose to fame thanks to her character Hermione Granger in the Harry Potter saga. Watson was a revelation as the brightest witch of her generation in the film series and with that and several other roles has also turned out to be one of the finest actresses of her generation. While her act as Hermione was so perfect that we cannot imagine anyone else pulling off the same, there's no denying that Watson has performed equally well and given some remarkable performances outside the Harry Potter series.  Emma Watson Birthday Special: Here's Taking a Look at the Way She Dresses to Express and Not Impress (View Pics).

As the actress celebrates her birthday on April15, we look at some of her best performances outside of the HP universe. Recently, Watson shined in Greta Gerwig's adaptation of Little Women which was based on Louisa May Alcott's novel. Watson essayed the role of Meg March and managed to give a brilliant performance. On her birthday, here's looking at some amazing roles of the British actress.

The Perks Of Being a Wallflower

Another book adaptation starring Emma Watson that won her a lot of praises was this film. The film starred Watson along with Logan Lerman and Ezra Miller in lead roles. Directed by Stephen Chbosky who also wrote the book by the same name, the film was a moving come-of-age drama with some incredible performances by the lead cast.

In Greta Gerwig's adaptation of Little Women, Watson showed immense maturity in the role of the eldest March sister Meg. The actress' emotional scenes were on point and even in her limited screen space, the actress surely shined bright. Among her recent performances, this one is definitely dearest to us.

Beauty and the Beast

Disney's live-action remake of its classic Beauty and the Beast might not have impressed everyone but one cannot deny that Watson was beyond amazing as Belle in this musical. Not only did she look the part in her prettiest avatar but also managed to bring the beloved character some more depth with her performance.

Ballet Shoes was a British television film, adapted by Heidi Thomas from Noel Streatfeild's 1936 novel starring Emma Watson in the character of Pauline Fossil. The film which is considered to be an exhilarating tale of orphans , the Fossil sisters had one of Watson's earliest performance that left a lasting impact and was a reckoning of her upcoming success. If you haven't watched this one, do catch this online.  Emma Watson And Tom Felton Have A Harry Potter Christmas Reunion And We Can Only Say 'Wicked' (View Pics).

We certainly hope Emma Watson continues to be the amazing person that she is off-screen as well as on-screen. We can't wait to see more such amazing performances soon.

(The above story first appeared on LatestLY on Apr 15, 2020 10:57 AM IST. For more news and updates on politics, world, sports, entertainment and lifestyle, log on to our website latestly.com).