While the film's lead Vin Diesel returns, he is also joined by his squad from the previous films Michelle Rodriguez, Jordana Brewster, Tyrese Gibson, Ludacris, and Nathalie Emmanuel. 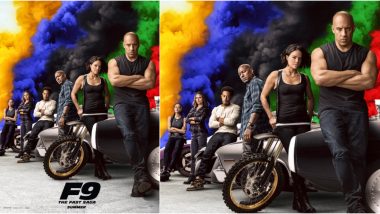 We bet the character posters of Fast and Furious 9 aka F9: The Fast Saga have already got you super excited for the film. The trailer of the much-awaited ninth instalment of the series is all set to release on February 1 and ahead of that, the makers have now released another poster of the film featuring its lead cast. This time the cast gets a new addition as John Cena enters the world of the Fast and Furious. While the film's lead Vin Diesel returns, he is also joined by his squad from the previous films Michelle Rodriguez, Jordana Brewster, Tyrese Gibson, Ludacris, and Nathalie Emmanuel. F9: The Fast Saga Posters: Vin Diesel, John Cena, Michelle Rodriguez and Others Are All Set To Drive You Crazy! (View Pics).

While the character posters showed the lead cast posing in front of colourful backdrops, the new poster features everyone together. Sharing the new poster, Vin Diesel wrote, "Mi Familia...". The poster shows Diesel standing ahead with his team including Michelle Rodriguez, Jordana Brewster, Tyrese Gibson, Ludacris, and Nathalie Emmanuel behind him.

The trailer launch event of F9 is going to be epic with performances by the likes of Cardi B, Wiz Khalifa, Charlie Puth and more. We bet you can't wait to see the exciting trailer soon. F9 is directed by Justin Lin and written by Daniel Casey. Jordana Brewster, Helen Mirren and Charlize Theron are a part of the ninth instalment that will release on May 22.

(The above story first appeared on LatestLY on Jan 30, 2020 11:36 PM IST. For more news and updates on politics, world, sports, entertainment and lifestyle, log on to our website latestly.com).