Till date, only 50 movies have been able to hit that milestone. Everything from Marvel’s Avengers, to Transformers: Age of Extinction, to Star Wars, the list consists of movies from some of the biggest franchises. 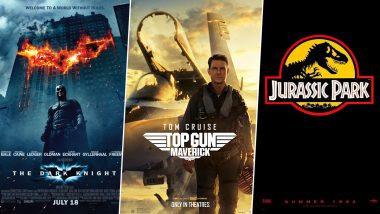 The success of Top Gun: Maverick is one that will be talked about by many for a long time to come. With the Tom Cruise film officially hitting $1 Billion at the box office, Top Gun: Maverick has entered a long line of movies to hit that milestone. It’s honestly surprising to see a movie sequel to a 1986 film that was supposed to release back in 2020, get delayed by 2 years due to the pandemic, still hit that mark. It’s not a superhero film, or a huge franchise starrer, just a plain good ole time at the theatres and only the second pandemic release to hit that mark. Can’t bruise the Cruise, I guess. Top Gun Maverick Movie Review: Tom Cruise's Legacy Sequel is a Gripping, Emotional Spectacle That Honours the Original! (LatestLY Exclusive).

Till date, only 50 movies have been able to hit that milestone. Everything from Marvel’s Avengers, to Transformers: Age of Extinction, to Star Wars, the list consists of movies from some of the biggest franchises. Movies like Avatar and The Dark Knight changed the course of cinema, while films like Transformers, well they had explosions, but still a fun time at the movies. So, let’s take a look at 10 of the best films that have hit the $1 Billion mark at the box office.

Avengers: Endgame not only made history by joining the $1 Billion club, but by also joining the $2 Billion club and becoming the highest grossing film of all time. However, it was taken over by Avatar after a re-release. Nevertheless, Avengers: Endgame concluded the Infinity Saga of the MCU in a spectacular fashion. Featuring many emotional send-offs for some major characters, this was a movie that passed the torch to a new age of superheroes. Avengers Endgame Completes Three Years: Fans Reminisce About Marvel's Epic Crossover on Its Third Anniversary!

The conclusion to the Harry Potter saga had many crying in the theatre. With Harry and team taking their final stand against Voldermot and his army, the film was a culmination of everything the franchise had been leading up to yet. Not only that, but it saw the end of all the storylines that had been setting up for the last seven films. If you want to see a franchise deliver perfectly with its ending, then Harry Potter and the Deathly Hallows: Part 2 is for you.

Taking place right before the events of Star Wars: Episode IV – A New Hope, Rogue One brought us back to the classic era of Star Wars where the Empire ruled and all hope was lost. Amidst that darkness, a group of ragtag heroes band together to steal the plans of the Death Star and deliver it to the Rebellion. Feeling more like a Suicide Squad film than the actual Suicide Squad film that came out the same year, this is Star Wars goodness that hadn’t been seen since the originals.

James Cameron’s tragedy film that chronicles the sinking of Titanic is one of a kind. Cameron’s bold decision to turn this into a romantic story paid off big time as you will definitely be left in a state of an emotional mess after you’re done watching it. Featuring career-making performances from Leonardo DiCaprio and Kate Winslet, this a movie that packed in a great romantic adventure with a third act that will tug at your heart strings. It also became the highest grossing film of all time, which would eventually be topped by Cameron only.

With Titanic James Cameron would create history, but then doing it once wasn’t enough, so he did it again with Avatar. A technical Marvel that still holds up amazingly to this day, Avatar features the beautiful planet of Pandora with the Na’Vi fighting for their land from humans. You don’t see films like Avatar often, and the craft at display over here is just absolutely magnificent. Here’s hoping Avatar: The Way of Water lives up to the first film.

The Daniel Craig era of James Bond films was very inconsistent in its quality. His tenure saw some of the best Bond films with some very mediocre ones sprinkled in. However, Skyfall defied all expectations when it released and delivered a Bond film that felt like a love letter to this character. Seeing an older and broken-down version of Bond, the movie saw him come to terms with the ghost of his past while trying to save MI7 from a cyber threat. It also took back Bond to his roots with the introduction of a Male M and Moneypenny too. Daniel Craig Birthday Special: 5 Amazing Moments of the Actor as 007 From His James Bond Films!

Back in 1993, Steven Spielberg changed the game with how he presented visual effects over here. Jurassic Park was the perfect summer blockbuster that started many people’s obsession with dinosaurs. Featuring a park that was basically a dinosaur zoo and with a cast of very charming characters, this was a home run. The effects of the dinosaurs still hold up to this day as Spielberg blended practical animatronics with CGI. From Jurassic World Dominion to Jurassic Park, Ranking All 6 Films in the Classic Dinosaur Franchise as It Comes to a Close!

The Lord of the Rings: The Return of the King

The Return of the King is how you end a trilogy. With everything building up to this one spectacular, three-and-a-half-hour epic, Peter Jackson not only honours JRR Tolkien, but elevated his work to great levels. Featuring Middle Earth’s final stand against Sauron to destroy the one ring to rule them all, the story here is filled with hope, optimism and spectacular battle sequences that definitely had audiences cheering in theatres back in 2003.

Maybe its recency bias, but films like Top Gun: Maverick aren’t made anymore. A sequel to the 1986 film Top Gun, this movie had no right to be as good as it was. It not only defied expectation, but exceeded them like a jet flying at Mach 10. Featuring Maverick being called back to Top Gun to train a new generation of pilots for a high-level mission, the film features great drama with some of the best action you will see in years. Top Gun Maverick Box Office Collection: Tom Cruise-Starrer Becomes The First Film Of 2022 To Pass $1 Billion Worldwide!

Still believed by many to be the gold standard of superhero movies, The Dark Knight is one of the best movie sequels to ever come out. Featuring Heath Ledger’s amazing portrayal of the Joker who pushed Bale’s Batman to his limits so he could break his one code, Christopher Nolan created a cinematic experience that elevated the comic book film genre. It’s a testament to how good films centred around these larger-than-life characters can be, and how they are worthy of taking bold decisions and risks.

(The above story first appeared on LatestLY on Jun 28, 2022 06:59 PM IST. For more news and updates on politics, world, sports, entertainment and lifestyle, log on to our website latestly.com).

Comments
Tags:
$1 Billion Films 10 Best Films to Hit the $1 Billion Mark Avatar Avengers: Endgame Films With $1 Billion Harry Potter and the Deathly Hallows: Part 2 Jurassic Park Rogue One Skyfall The Dark Knight The Lord of the Rings The Return of the King Titanic Top Gun: Maverick
Comments
You might also like