Nathalie Emmanuel, who played the role of Missandei, an advisor to actor Emilia Clarke's character Daenerys Targaryen in the insanely popular HBO show Game of Thrones, opened up about how she is inspired by her co-star. For Emmanuel, her time on 'GoT' was much more than just a job. 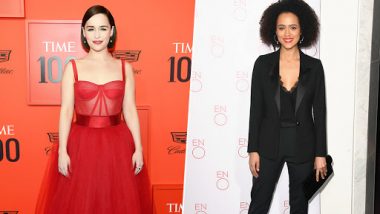 Washington D.C: Actor Nathalie Emmanuel, who played the role of Missandei, an advisor to actor Emilia Clarke's character Daenerys Targaryen in the insanely popular HBO show Game of Thrones, opened up about how she is inspired by her co-star. For Emmanuel, her time on 'GoT' was much more than just a job. The Witcher Teaser: Henry Cavill’s Fantasy Series Will Fill Up the Void Left by Game of Thrones (Watch Video)

The star opened up in this week's issue of People about her character's sudden death in the final season, the bittersweet ending, and the friendships she made, especially with Clarke, who recently revealed that she underwent two life-saving brain surgeries over the last eight years to correct two different aneurysm growths."Emilia, as a friend and colleague, is just such a joy," Game of Thrones Star Sophie Turner Comes to Alex Morgan’s Rescue Amid Backlash Over Tea-Sipping Celebration

Emmanuel said."I really have thoroughly loved working with her. I loved learning from her. And we just check in with each other every so often," the 30-year-old actor added.The 'Fast and Furious 9' actor called Clarke a "beast" as the star returned to work after her surgeries."I remember coming back to work and hearing about her surgeries and being like, 'Wow, it's just so crazy and there you are, ready to go back to work.'

She's such a beast. As a woman, she really picks herself up and keeps going," she said."She's really inspiring, I'm so proud of her. And then what she's chosen to do with that experience, to help other people, is so amazing and I'm just incredibly happy for her and how important her work is," she added. The two actors' characters were suddenly separated after Missandei was brutally beheaded in the last season, leaving fans and Emmanuel shocked and distraught."I basically cried my eyes out when I read the script," said Emmanuel.

"To be honest with you, I was sort of expecting it to an extent, but I've expected it with every season. And I think that finally, I was like, Oh, she's gone. That's sad because of how much I love her and how much I love playing her," she added. The actor shared that she was proud of her character's journey throughout the epic fantasy series."She definitely went out with strength and she went out with a ferocity that we probably hadn't seen from her before. I was very proud of her journey throughout the show," she said.

Emmanuel also said that she's not only proud of her character but the show's overall run and ending as well."Reading the final episode, I felt hopeful when I read it," she said."I felt slightly hopeful. I thought, 'This sounds like the beginnings of democracy in Westeros.' It's such a hard plane to land at the end of the day, because everybody, they're all very wrapped up in the characters and stories.

Everyone has their favourite. No one is going to love everything that you do. And whilst keeping everybody happy, I just didn't see that as being possible. But I think that they ended it in such a lovely way. I am very proud of it," she added. On the work front, Emmanuel will be next seen in Hulu's 'Four Weddings and a Funeral' adaptation.