George Clooney Recalls His 2018 Motorbike Accident, Says ‘People Stopped to Film Me on the Ground Instead of Helping’

The 60-year-old actor-director flew over the handlebars of his bike when a car turned in front of him while riding in Sardinia, Italy, in 2018, and was convinced he would die in the aftermath. 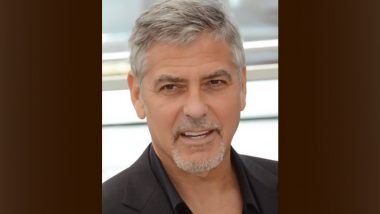 Hollywood star George Clooney thought he would die in his 2018 motorbike crash and said he was frustrated that people stopped to film him on the ground instead of helping. The 60-year-old actor-director flew over the handlebars of his bike when a car turned in front of him while riding in Sardinia, Italy, in 2018, and was convinced he would die in the aftermath, reports femalefirst.co.uk. Emmy Award-Winning Actor Kyle Chandler to Star in George Clooney’s Post-Apocalyptic Netflix Film.

He said: "I was waiting for my switch to turn off. I'm fine now." George was not impressed when a gathered crowd started to film him out on the ground rather than trying to help. He told the Sunday Times Culture magazine: "If you're in the public eye, what you realise when you're on the ground thinking it's the last minute of your life is that, for some people, it's just going to be entertainment for their Facebook page. I'm a pretty positive guy, but that told me - clearly - that you really are here just for their entertainment... You want to take every one and shake them!" The Midnight Sky Trailer: George Clooney's Directorial Looks Frightening for 2020 (Watch Video).

The 'Tender Bar' director "fights against" the modern instinct to constantly document everything that happens in their lives. Recalling a fundraiser for Barack Obama, he said: "Everyone was filming. I said, 'They can't say they met the president - they filmed it.' People are living their lives this way and I fight against it." "If my kids do something cute, I want to take a picture, but I have to say, 'Be in the moment - you don't have to record everything.'" Clooney feely "lucky" that he didn't find global fame until he was in his 30s because he doesn't think people can ever be "prepared" for it at a young age.

He said: "Those lights where mosquitoes fly into the zapper? When you're a young actor you run to success, which also includes fame. And the minute you get there you can get burnt good. Everything gets elevated in terms of what you can do or say - you have to learn how to be responsible. "I'm lucky I got famous when I was 33, not 23. I'd have been shooting crack into my forehead if I had been 23 and given money and success. You're not prepared for it. You need to have failed a s***load. "If you have you never trust success. Every day I think, 'If all hell broke loose, I have a couple of houses I paid cash for, I could sell one.' My mentality is still that. Failures teach you everything - you learn nothing from success."

(The above story first appeared on LatestLY on Nov 29, 2021 10:31 PM IST. For more news and updates on politics, world, sports, entertainment and lifestyle, log on to our website latestly.com).