Happy Birthday Henry Cavill: 10 Hot Photos Of The Actor That Will Make You Fight Lois Lane For Him

Man of Steel star Henry Cavill turns 37 years old today. As he celebrates his birthday, in the time of social distancing, we thought you'd like to ogle at his pictures. To celebrate his birthday, of course. Henry Cavill is handsome AF. He makes women go weak in the knees and turn men green with envy. But in an interview, he has revealed that he wasn't always hot. 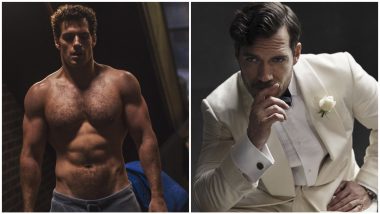 Man of Steel star Henry Cavill turns 37 years old today. As he celebrates his birthday, in the time of social distancing, we thought you'd like to ogle at his pictures. To celebrate his birthday, of course. Henry Cavill is handsome AF. He makes women go weak in the knees and turn men green with envy. But in an interview, he has revealed that he wasn't always hot. He said, "I must have been a little bit overweight – at least compared to everyone else. I wasn’t obese by any means but I was fat. I was."The Witcher: Henry Cavill Gave Up Drinking Water for Three Days to Flaunt His Chiselled Body in the Shirtless Scenes.

Also, while you be envious of his rad bod, the actor himself is jealous of people who have been to college "I always look at kids who went to university and college with kind of a sense of envy because, as much as I'm really happy where I am, I also think it's just that thing: it's an establishment, it's a rite of passage, especially in England – you go to university and you do the university thing. Whether it's to play for teams, whether it's just going to lectures," he said in an interview. Netflix Series The Witcher Review: Henry Cavill is Hot But Anya Chalotra and Freya Allan Are the Pillars Of This Visual Spectacle.

Without Further Ado, Here Are Some Of The Hottest Pics Of Henry Cavill:

Warm up phase for Superman training started today! Posting this pic to set myself a minimum goal...and force myself to actually keep going haha! @gritandteeth

When Superman training, use your mind, you must. #Yoda #UseTheForce #SupermanTraining #JusticeLeague #Superman

Don't taste the white chocolate, they said. BE the white chocolate. And thus, I became. See this and more in the latest edition of The Rake magazine. Before you run out and discover the wonders contained therein however, I'd like to thank the most eloquent Editor of the magazine and writer of the article, Tom Chamberlin. The pourer of white chocolate herself (read: stylist), Jo Grzeszczuk. The very talented photographer, Kalle Gustafsson. And also a special thanks to Mark's club in London for the second to none setting. @therakeonline @tfchamberlin @grzeszczuk @Kalle_gustafsson @marksclubmayfair

Sight for the sore eyes

A hint of goofiness makes him even hotter

Channeling the man of the hour, the man of big hugs, big laughs and big pints of Guinness, my man Jason Momoa. How'd I do? Seriously though, I just finally got the chance to watch Aquaman here in Hungary. Jason, James and everyone involved in that movie, smashes it out of the (water)park. If you haven't seen it yet, go check it out. Jason, love you bro, you crushed it. @PrideOfGypsies @CreepyPuppet #Aquaman

The journey continues. Thank you to Mr Dave Rienzi for being such a wonderful guide. My physical journey over the years has been an interesting one, with plenty of pit falls and plenty of moments of reward. I've been reflecting on them a lot recently and I've been very fortunate to work with some fantastic minds. I'm thankful to them all. Recently I've been exploring some of the big players in bodybuilding, both from the past and the present. It's absolutely fascinating to see what they put themselves through, the drive and mental strength required to get to such a place physically. Phil Heath in particular has caught my eye not only for his achievements but also for his genuinely humble and informative approach to his messaging. All this while being a 7x Mr Olympia. If you haven't checked out his page it's worth a peek. @DaveRienzi @PhilHeath #GymStuff

And lastly, this meme by a fan, that perfectly fits the world today

Happy birthday, Henry. The actor will be next seen playing the role of Sherlock Holmes in the film, Enola Holmes. The second season of his web-series The Witcher is also announced.

(The above story first appeared on LatestLY on May 04, 2020 04:56 PM IST. For more news and updates on politics, world, sports, entertainment and lifestyle, log on to our website latestly.com).

Comments
Tags:
Batman vs Superman Henry Cavill Henry Cavill birthday Man of Steel The Witcher
Comments
You might also like