Netflix Series The Witcher Review: Henry Cavill is Hot But Anya Chalotra and Freya Allan Are the Pillars Of This Visual Spectacle

Netflix series The Witcher has finally dropped on the streaming platform and is receiving a mixed response from the fans. These responses are mostly from those who were trying to search the soul of Game of Thrones in it, and those, who are brand new to the world of fantasy. 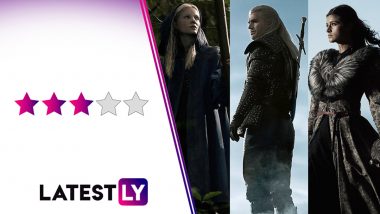 Netflix series The Witcher has finally dropped on the streaming platform and is receiving a mixed response from the fans. These responses are mostly from those who were trying to search the soul of Game of Thrones in it, and those, who are brand new to this world of fantasy. This review is from the person from the second lot, that is from someone who is fortunately or unfortunately free from the emotional baggage of GOT! The series created by Lauren Schmidt Hissrich is based on the book series of the same name by Polish writer Andrzej Sapkowski. There are also video games on the theme but let’s not get into those as the series is majorly related to descriptive nature of the books. The Witcher Review: Twitterati Is Going Bonkers Over Henry Cavill's New Netflix Series! (Read Tweets).

The titular role of ‘the witcher’ aka the Geralt of Rivia is played the extremely handsome, Henry Cavill. The story has more of his perspective than the rest of the strong characters. The plot is set into an imaginary timeline where there are royal households, mutants, demons, monsters and dragons existing. The sets give more of a Gothic feel, with lots of dust and snow around.

The Witcher is the key link to the politics between the kingdom of Cintra and Nilfgaard. With two timelines running in the same season back and forth, it might sometimes get too confusing between the characters and the politics that is being actually played by the two kingdoms.

Speaking of characters, Henry (Yes, the hot Witcher), is a visual treat himself. But when it comes to the performance, his subtle constant ‘Hmm’ and one-liners might just get monotonous at a point. Even though the makers have justified the same saying he is a kind of breed that got the super-human power at the cost of his emotions, we sometimes get confused whether the curse is even working on him. (lots of confusion, I agree!). One of the interesting characters is ‘Princess’ of Cintra Renfri (Emma Appleton) who we wish to see more.

Then there is the next powerful character which is Yennefer of Vengerberg (Anya Chalotra). Her transformation from a discouraged, shy girl with ailments of hunchback and bent jaw to a beautiful mage to a king is simply commendable. She is the new girl to look out for clearly! Freya Allan as Princess Cirilla / Ciri is a promising face who might have more work to do in season two. Her presence on the screen is refreshing. Joey Batey as Jaskier is humorous and like a sunshine in the otherwise dark series. MyAnna Buring as Tissaia de Vries needs a special mention as she keeps us guessing about her true intentions till the end.

One of the major reasons why you can sit through the first two episodes is the amazing visual effects and long shots. Even if one might have a bit of tough time to figure out the jargon-like names and heavy language, the picturization doesn’t let you quit the scene. The sword fighting scenes are crisp and are fun to watch. The series also has bold scenes which include sex and nudity to spice up the connections. However, when it comes to boldness regarding the violence, the faint-hearted should just fast forward the part as it is no joke to watch body parts being chopped or too much bloodshed in its extremely raw form. Background music is another very, very important element of this series. The haunting old school music during the iconic scenes makes it ten times impactful. Let’s give their due to music composers Sonya Belousova and Giona Ostinelli for such amazing pieces and songs like “The Last Rose of Cintra” and “Toss a Coin to Your Witcher.”

- Performances of the Lead Characters

-Visuals of chopping and slaying that could be avoided

In conclusion, I would like to say that the series is for someone who loves the genre to the core. However, the ones who are trying to catch up on it just for the sake of the ‘word of mouth’ will have to push themselves through the first two episodes, and then you will be hooked to it. The season ends at a very compelling question, making the viewers wait for the answer in the form of season 2. Go for it, if you are someone who has an equal amount of love for reading fantasy-themed books and movies/series.

(The above story first appeared on LatestLY on Dec 23, 2019 02:25 PM IST. For more news and updates on politics, world, sports, entertainment and lifestyle, log on to our website latestly.com).