Jagame Thandhiram: From Wonder Woman to Troy, 5 Hollywood Biggies You Might Remember Having Seen James Cosmo, Villain of Dhanush’s Film!

Scottish actor James Cosmo is marking his debut in the Indian film industry with this film, and seeing his badass avatar in the trailer has left everyone impressed already. 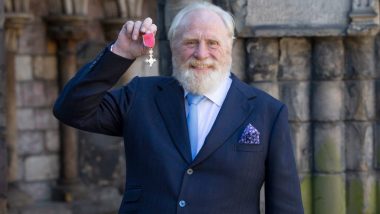 Dhanush's upcoming film, Jagame Thandhiram, is one of the most anticipated films of the year. The action drama will be premiering on Netflix on June 18, and the makers are leaving no stones unturned to promote the film. The trailer of the film is getting quite some love from the audience, and while everyone is looking forward to seeing Dhanush in the film, they are also excited to see Hollywood star, James Cosmo, in the film. Jagame Thandhiram Trailer: Dhanush And Aishwarya Lekshmi's Gangster Movie Goes All Guns Blazing From Tamil Nadu To London (Watch Video).

Scottish actor James Cosmo is marking his debut in the Indian film industry with this film, and seeing his badass avatar in the trailer has left everyone impressed already. The film revolves around Suruli (Dhanush) who is a nomadic gangster. He has to choose between good and evil in a war for what one can truly call home. James plays one of the baddies in the film, and his fans cannot wait to see what his role will look like.

But while there are still a few days left for the audience to see Dhanush, James and the other cast of the film create magic on screen, we are sure you must remember one of the many hit projects James has been a part of. The bankable star has a lot of biggies in his kitty including films like Wonder Woman, Troy and shows like Games Of Thrones. Let us take a looks at some of the biggies he has been a part of:

James essayed the role of Field Marshal Douglas Haig in Wonder Woman. He was a senior officer of the British Army. During the First World War, he commanded the British Expeditionary Force, and played a key role in the story of Gal Gadot starrer film.

James appeared in the 2005 released film titled Chronicles of Narnia. He essayed the role of Father Christmas in the film. He gives the kids weapons to defend themselves and fight for Narnia.

James essayed the role of James Cosmo as Glaucus, second-in-command of the Trojan armies in Troy. His role was widely appreciated by the fans. Jagame Thandhiram: Dhanush’s Action Thriller To Release On Netflix!

James was also a part of the 1996 British black comedy-drama titled Trainspotting. He essayed the role of  Davie Renton. His character was that of Davie Renton. He is the father of Ewan McGregor's character Mark Renton.

James portrayed Jeor Mormont, Lord Commander of the Night's Watch, in the HBO series Game of Thrones. His role was quite crucial in the story and people loved how well he carried it out.

Director Karthik Subbaraj said Jagame Thandhiram is his dream project and he has made it with all heart. “The film is made with the ambition of telling a gripping story about a globally prevalent issue through a locally rooted character in a most interesting and entertaining way,” Subbaraj said in a statement. Game of Thrones Actor James Cosmo in Dhanush’s Next! Hollwyood Star Shares Frame with Director Karthik Subbaraj and Team.

The film also stars Aishwarya Lekshmi, Kalaiyarasan, Joju George in key roles. The music is composed by Santhosh Narayanan. The film is directed by Karthik Subbaraj and backed by YNOT Studios and Reliance Entertainment.

(The above story first appeared on LatestLY on Jun 02, 2021 02:07 AM IST. For more news and updates on politics, world, sports, entertainment and lifestyle, log on to our website latestly.com).