James saw Amber just hours after she had an explosive fight with Depp. The same fight was responsible for multiple bruises on her face and The Tourist actor wants to clarify if she painted the same on herself. 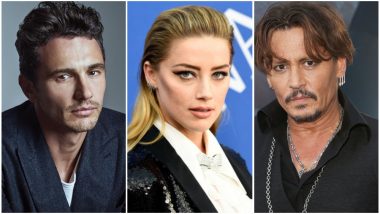 Johnny Depp and Amber Heard's divorce is probably the worst-case Hollywood has ever witnessed. While she accused him of physical assault, he filed a defamation suit against this Aquaman actress. And if recent reports are to go by, Spider-Man actor, James France could be subpoenaed by the actor's lawyers to verify Heard's claims. Reason? Because elevator footage shows Franco and the actress together in an elevator around the same time when she had a major fight with Depp.  Johnny Depp Wanted Warner Bros to Fire Ex-Wife, Amber Heard from Aquaman?

According to a report in The Blast, James saw Amber just hours after she had an explosive fight with Depp. The same fight was responsible for multiple bruises on her face and the actor wants to clarify if she painted the same on herself. He believes she painted the wounds herself for gaining positive publicity.

However, Heard's attorney Eric M. George in his conversation with E! News has tagged Franco's subpoena as 'irrelevant'. "Amber Heard and James Franco once lived in the same apartment complex and were simply taking an elevator at the same time. Period. Johnny Depp and his team have been trying—and failing—to place a salacious story based on this irrelevant footage for weeks. It's pathetic," he added. Amber Heard States How Johnny Depp Strangled Her, Hit Her And Pulled Her Hair In New Court Documents.

On the other hand, Depp's lawyer told The Blast, "We are interested in James Franco and Elon Musk as fact witnesses because we have evidence they are men who saw Amber Heard's face in the days and nights between when she claimed Mr Depp smashed her in the face on May 21 and when she went to court with painted on 'bruises' to obtain a Temporary Restraining Order on May 27." The case is taking an ugly turn with each passing day and we wonder whose name will be added next.

(The above story first appeared on LatestLY on Jul 03, 2019 03:24 PM IST. For more news and updates on politics, world, sports, entertainment and lifestyle, log on to our website latestly.com).