Amber Heard Reveals how Johnny Depp tried to ruin her career in Hollywood. 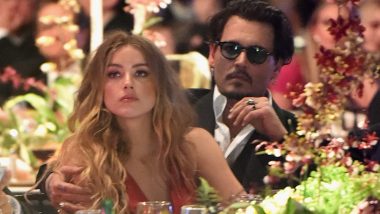 Johnny Depp and ex-wife Amber Heard's arguments are taking an ugly turn each day. While he has personally decided to sue her for tarnishing his image with wrong claims, Amber, on the other hand, has revealed horrific details about his domestic violence. And if the allegations weren't enough, a recent revelation by Heard suggests how he tried to get her sacked from Jason Momoa's Aquaman. As per a report in The Hollywood Reporter, Depp personally tried to convince former Warner Bros chairman, Kevin Tsujihara, to fire his ex-wife from DC's Aquaman. Amber Heard States How Johnny Depp Strangled Her, Hit Her And Pulled Her Hair In New Court Documents.

The report in THR suggests how Depp ‘personally lobbied Tsujihara to remove (Heard) from Aquaman and block her from getting other projects.’ Tsujihara has now been served a deposition notice to appear in the court and testify if Depp ever tried to persuade him to remove Amber Heard from his projects. Aquaman Actress Amber Heard Reveals Shocking Details About Johnny Depp's Alter Ego, 'Monster'.

Amber in her Washington Post op-ed had earlier hinted about Depp's involvement in ruining her career. “Questions arose as to whether I would be able to keep my role of Mera in the movies Justice League and Aquaman,” she’d written. She even revealed how she lost out on a major movie despite getting a confirmation from the makers. Two years after her divorce with Depp, he still continues to wreak havoc in her life and she has had enough of it.

(The above story first appeared on LatestLY on Apr 20, 2019 08:30 PM IST. For more news and updates on politics, world, sports, entertainment and lifestyle, log on to our website latestly.com).