Jason Statham Birthday: From The Transporter Series to Hobbs and Shaw - Here's Looking At Best Action Films of the British Actor

He is best known for essaying the popular role of Deckard Shaw in the Fast and Furious series and his character has even got a spin-off series Hobbs and Shaw. 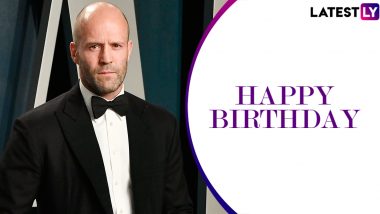 Jason Statham is an English actor and film producer who is best known for essaying the role of the antihero and is one of Hollywood's biggest action superstars. He's played it all, the mean-ass villain to a righteous agent and has always managed to leave us impressed with his skills to make every action sequence as smooth as possible. He is best known for essaying the popular role of Deckard Shaw in the Fast and Furious series and his character has even got a spin-off series Hobbs and Shaw.

One of the most admirable things about Statham is that he has performed his own stage combat and stunts. While the actor has been criticized for lacking depth and variety; however, he has also been praised for leading the 2000s and 2010s action movie resurgences. As the actor celebrates his birthday on July 26, we look at some of his biggest action films that simply cannot be missed.

With the Italian Job, Statham got to play the handsome yet comedic Rob and he left quite an impression on us in this multi-starrer film. Not to forget his brilliant car stunts in the film were a definite highlight.

If you haven't watched The Transporter, well, you have missed out on Jason Statham's classic action flicks. The films are packed with some amazing adrenaline-rushing sequences and while the story may take a backseat, these films make for great popcorn entertainment.

The spin-off series with  Dwayne Johnson and Jason Statham reprising their roles from the main series as Luke Hobbs and Deckard Shaw, the film has everything going for it. With the likes of Johnson, Statham and Idris Elba packed together with high octane action sequences, there's nothing else you could have asked for.

Jason Statham and Jet Li is a deadly combo and this film stars them as nemeses. It's a classic FBI agent vs rogue element story but the action is just amazing. The gang thriller is a favourite for many Statham fans.

We bet if you are a Statham fan you have already enjoyed these Statham special action thrillers but what better occasion than his birthday to go over them once again.

(The above story first appeared on LatestLY on Jul 26, 2020 09:20 AM IST. For more news and updates on politics, world, sports, entertainment and lifestyle, log on to our website latestly.com).