"Harris used his celebrity and wealth to continue his exploitation of children, expanding the tools available to him to manipulate them into gratifying his seemingly insatiable sexual desires," assistant US attorney Kelly Guzman said in her sentencing memorandum. 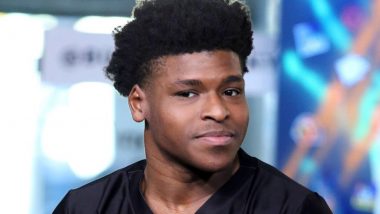 Jerry Harris, the former star of hit docu-series Cheer, has been sentenced to 12 years in federal prison for soliciting sex from minors. According to USA Today, Harris' sentencing comes five months after the former reality star plead guilty to sexually assaulting a 15-year-old in a bathroom during a cheer competition and paying a 17-year-old to send him sexually explicit videos and photos, reports Variety. Jerry Harris Pleads Guilty in the Federal Child Pornography Case Against Him.

Harris also admitted to similar conduct with other minors, but those charges were dropped in a plea agreement. According to Variety, Harris was first arrested for charges of child pornography in September 2020, months after the first season of Cheer debuted in January of that year.

The series, which follows the cheer squad of Navarro College competing in the Daytona national championship, was a critical success, with team member Harris becoming a fan favourite and minor celebrity. Harris' charges would later be addressed in the show's second season earlier this year, which featured an episode dedicated to his case, including interviews with his victims.

According to court documents obtained by USA Today prior to the sentencing, Harris' lawyers argued for a six-year sentence, saying that the 22-year-old had a "warped" view of relationships due to being assaulted at 13 by a 19-year-old. Prosecutors argued for a 15-year sentence, saying that Harris' childhood was not an excuse for his actions. Cheer Star Jerry Harris Arrested On Charge Of Production Of Child Pornography.

"Harris used his celebrity and wealth to continue his exploitation of children, expanding the tools available to him to manipulate them into gratifying his seemingly insatiable sexual desires," assistant US attorney Kelly Guzman said in her sentencing memorandum.

According to USA Today's reporting, the mother of two of the victims intends to file a civil suit against Harris and the US All Star Federation, the governing body for all star cheerleading and dance in the United States. According to USA Today, USASF was notified of the allegations against Harris in May 2020, but failed to take action until the allegations went public in September.

(The above story first appeared on LatestLY on Jul 07, 2022 03:09 PM IST. For more news and updates on politics, world, sports, entertainment and lifestyle, log on to our website latestly.com).