The historical drama film, Judas And The Black Messiah, has been scheduled for a theatrical release in India on March 5. The film stars Daniel Kaluuya, Lakeith Stanfield, Jesse Plemons and Dominique Fishback. 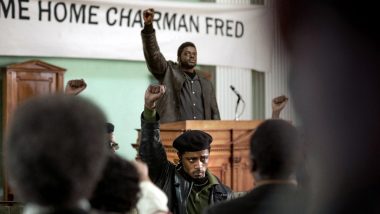 Still From Judas And The Black Messiah (Photo Credits: Twitter)

The historical drama film, Judas And The Black Messiah, has been scheduled for a theatrical release in India on March 5. The film stars Daniel Kaluuya, Lakeith Stanfield, Jesse Plemons and Dominique Fishback. Inspired by true events, the film marks the studio feature directorial debut of Shaka King, who is known for helm,ing TV shows and short films. Marvel Announces New India Releases Dates for Black Widow, The Eternals, Thor: Love and Thunder and More

The film takes a look at the late 1960s, one of the most tumultuous and pivotal periods in American history. Based in Chicago, the film revolves around the betrayal of Fred Hampton (Kaluuya), chairman of the Black Panther Party in the late 1960s, by William O'Neal (Stanfield), an FBI informant. Marry Me: Jennifer Lopez, Owen Wilson Film’s Release Date Pushed Yet Again

"I think, for a lot of Black men, Fred Hampton is a real hero because of just how undaunted, unafraid and unstoppable he was, yet people always seem centered on the tragic way he died, not at all focused on the heroic way he lived. I wanted to change that," King said.

The project originated with King and his writing partner Will Berson, who co-wrote the screenplay, and Kenny Lucas and Keith Lucas, who co-wrote the story with Berson and King. The film also stars Jesse Plemons, Ashton Sanders and Martin Sheen. It will be released in India by Warner Bros. Pictures.

(The above story first appeared on LatestLY on Feb 10, 2021 12:44 PM IST. For more news and updates on politics, world, sports, entertainment and lifestyle, log on to our website latestly.com).