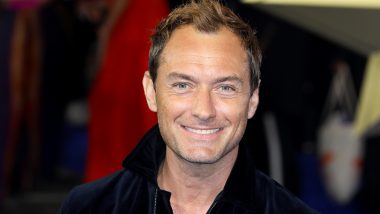 Actor Jude Law has become a father for the sixth time. The "Sherlock Holmes" actor confirmed that he and his wife Phillipa Coan have welcomed their first baby together. The baby is his sixth child, reports eonline.com. In an interview with host Jimmy Fallon, the actor was asked what he's been up to at home amid quarantine. Law said he's been gardening. "Oh! And on top of that I had a baby. So there you go," he shared. Jude Law to Play Captain Hook in Disney’s Live-Action Peter Pan Movie

The 47-year-old actor said "it's really wonderful" and shared that he and his wife felt "blessed" that they could just "nest" as a family. Though he noted that it was an "unusual" birth given the ongoing pandemic. This is the first child for Coan. The "Holiday" actor shares three kids -- Rafferty Law, 23, Iris Law, 19, Rudy Law, 18 -- with former wife Sadie Frost. Did You Know Colin Farrell and Jude Law Were Supposed to Star in a ‘Very Dark’ Batman vs Superman Movie?

(The above story first appeared on LatestLY on Sep 16, 2020 02:38 PM IST. For more news and updates on politics, world, sports, entertainment and lifestyle, log on to our website latestly.com).