Lenny Kravitz Birthday Special: 7 Pictures of the Singer With His Daughter Zoë Kravitz That Are Simple Goals (View Pics)

Lenny Kravitz and Zoë Kravitz shares a great camaraderie and often set father-daughter goals with their hearty relationship. A look at Lenny's Instagram profile, and you can easily figure out how much he loves his daughter. 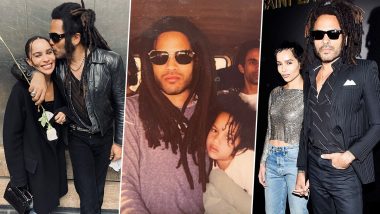 Rock, blues, soul, R&B, funk, jazz, reggae, hard rock, psychedelic, pop, folk, and ballads. - if there is one artist who infused these elements and made iconic songs, it has to be Lenny Kravitz. The legendary singer is a record-breaking artist who changed the music scene with his entry. His songs like It Ain't Over 'til It's Over, Again, Let Love Rule, Always on the Run, Are You Gonna Go My Way, Fly Away and American Woman are amongst the top hit songs created by Lenny. H.E.R. Rocks out 2022 Grammys Stage as She Performs with Lenny Kravitz, Travis Barker.

Because of the stardom that these songs brought to Lenny, he has always been in the limelight. His personal life too became something that his fans were eager to know about. This included his marriage to Cosby Show actress Lisa Bonet. After meeting backstage during a concert and two years later, the couple eloped to be married in a Las Vegas ceremony on November 16, 1987. They gave birth to a daughter, and that's how Zoë Isabella Kravitz was brought into this world.

While Lenny kept making music, Zoë got into acting. She has given some stellar performances in the past with the most recent being The Batman, and her father has always been her biggest cheerleader. The duo shares a great camaraderie and often set father-daughter goals with their hearty relationship. A look at Lenny's Instagram profile, and you can easily figure out how much he loves his daughter.

Today The Actor is celebrating his 58th birthday and on the very special occasion, we thought of taking you through his social media profile and share with some very adorable pictures of him with Zoë. Lenny Kravitz at the 2022 #MetGala.

Take A Look At The Pictures Below:

This Is So Cute!

What A Beautiful Picture!

Can The Duo Get Any Cuter?

Setting Goals For Everyone!

Lenny is a talented icon and a doting father and that is what makes everyone love him so dearly. Join us in wishing the star a very happy birthday.

(The above story first appeared on LatestLY on May 26, 2022 09:40 AM IST. For more news and updates on politics, world, sports, entertainment and lifestyle, log on to our website latestly.com).